A WEEK IN STUTTGART, GERMANY

I had not seen Steve in years, so it was quite a shock when at the Stuttgart airport, he recognized me but I not him.  There he was, a handsome, intelligent adult who whisked me off in a brand spanking new cozy red Porsche convertible. Wow!  This old lady was riding in style.
During my first evening, Steve and Sandy, his fiancé, taught me the Stuttgart underground system. Then they squired me to an exciting annual Wine Festival right in the center of downtown Stuttgart.  Whole restaurants were constructed, creating dining alcoves decorated with pseudo vines and hanging grapes that snaked around throughout the numerous streets just off the main square.  There were easily a thousand people or more eating and drinking to the music of occa  Laughter and fun filled the narrow streets.  It took us a while to find an empty table, but eventually we settled ourselves to eat traditional fare; I was a bit pickier than my hosts, as I am not a meat/sausage eater, which makes most menus a bit harder for me to traverse. However, everything was tasty, particularly the wine.
sional musicians, who had spaced themselves throughout the festival restaurants, bars, and sweets stalls.

Stuttgart is an easy city in which to get around. I was extremely impressed how dutifully the locals followed rules, which they obeyed in an almost saintly manner.  Take stoplights at corners, for example.  The light is green but there is no traffic anywhere in sight.  Would most Americans cross the street? Of course.  But a German, never.  I  watched Germans stand on the corners of silent streets in which there is no traffic in any direction waiting for the light to change, never crossing, until they were directed by the flashing sign. Also, all the Germans I saw get on the underground always bought a ticket to ride or had a pass.  They would even stand in great long lines to get their tickets, yet there was no turnstile or other mechanical device in which to slide the ticket when they entered a train platform. Nor were there any ticket conductors checking or punching the tickets to guarantee that passengers had actually purchased tickets to ride the underground transport.  It was amazing as well as refreshing to see a city of people functioning on the honor system.  Let that be a lesson to the world, I thought.

My hosts had to go to work, so I had each day free.  Some days I wondered the city, its museums, and revisited the wine festival area where, although not as crowded as it was in the evening, lots of people were lunching and drinking wine.  One day I lunched outside on the main Schlossplatz (square) at one of the museum restaurants.  It was lovely to sit at my table under the trees and watch the locals bicycling by, lunching on the grassy square, and even eavesdropping on my neighbors’ conversations,  none of which I could fully understood.  This actually made their conversations all the more interesting, as I filled in the untranslatable bits with my own sentences of what the people might actually  have been saying. That, of course, made many of their exchanges often nonsensical, very funny, sometimes somber or scary.  For me this added up to an interestingly fun filled lunch.

Another day I took the train to MercedesstraBe 100 to visit the Mercedes-Benz Museum.  I am a museum haunt. So I am extremely discriminatory when it comes to Museums ‘round the world, and I found the Mercedes Museum absolutely wonderful.  It is designed much like the Guggenheim in that patrons go to the top floor and work down from floor to floor on a circular ramp walkway.  The oldest vehicles are on the upper floors, and displayed along the circular walkways are photos and descriptions of the eras in which they were built.  So after surveying the cars from one historic period, then you also view a time line of events of that historic period - everything from WWI to talking movies, the Russian Revolution to FDR, Vietnam to Elvis and on and on!  It is so well done it’s astounding.  I grew up visiting the Henry Ford Museum in Dearborn, Michigan, so I am somewhat of a car buff.  Even if one is not, I believe that most visitors could spend two or three days at the Mercedes-Benz Museum, it’s so interesting. Oh! And the museum also has four restaurants, one outside, which is very pleasant, another on the mezzanine (great place to stop for tea/coffee and a snack). I also saw two more restaurants on the ground floor that looked a bit more impressive.  Last but not least, there is also a showroom for purchasing a vehicle if one is so inclined.  All in all, it is a grand museum. 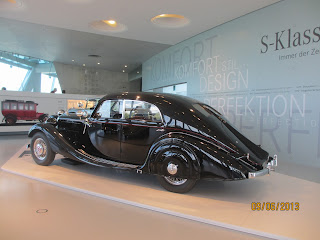 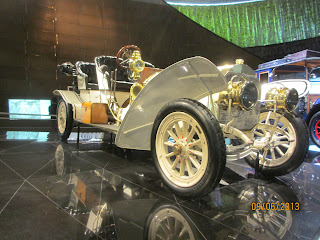 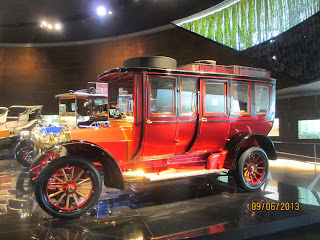 .
Examples of Mercedes-Benz of differen Eras.

There is also a Porsche museum in Stuttgart which unfortunately I did not  have time to visit. 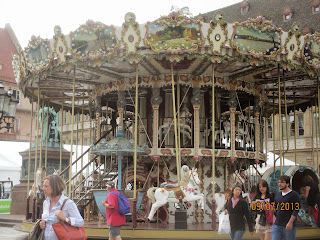 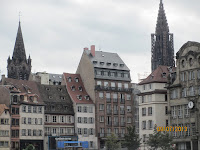 On Saturday, Steve and Sandy had a big surprise, a day trip to Strasbourg, France, the seat of the European Union.  Wow!  After about an hour and half train ride, we stopped for a ride on a carousel, then we headed for the town square with many wonderful, very narrow old buildings, some with as many as eight stories.  Then it was off to the old cathedral. 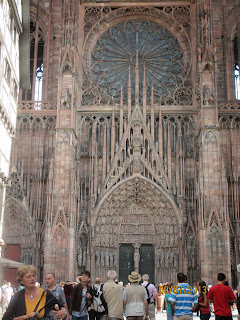 Because of time constraints, we had to decide if we would walk up the Church tower and see the view of the city or see the mechanical clock inside the Cathedral.  The long line of visitors waiting to see the clock colored our decision, and we opted for the walk up the 330 steps to the top.  Like the wolf in Goldilocks I huffed and puffed my way up. As I am asthmatic, upon reaching the top, I was proud of my accomplishment. The stairs were a real feat for me, but I made it and the effort was worth it (see Pictures of the view). 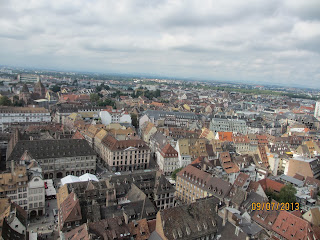 After, we had an excellent lunch at the La Cloche a Fromage.  Steve and Sandy had the restaurant’s signature dish, cheese fondue, there’s with a touch of sherry, while I ate a lovely local whole fish, roasted potatoes and a vegetable ragout.
After sumptuous desserts, off we went for a tourist boat ride on the canals, seeing lovely old buildings and also the EU offices.  Enormous!  I couldn’t quite fathom the need for such large office buildings.  To me, it appeared to be bureaucratic overkill, but what do I know about running the European Union.  However, it is much better to see countries working together than at war.  So as I say in my family I also say to Europe; good job! 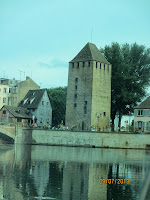 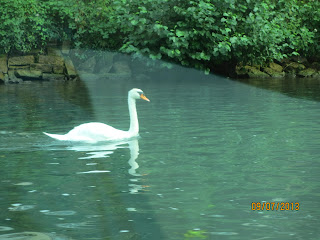 Steve and Sandy continued being the hosts with the most.  On Sunday off we went to a Pumpkin Festival, another yearly event held on the grounds of the beautiful Ludwigsburg Palace on the outskirts of Stuttgart. There is a yearly theme; this year it was Sports. 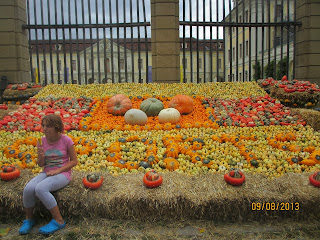 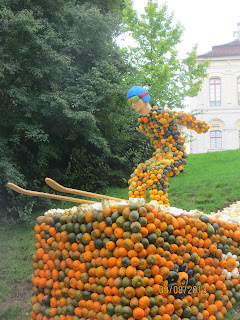 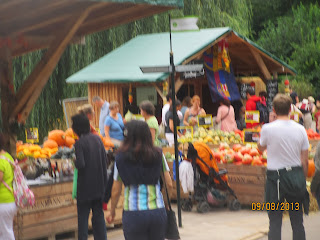 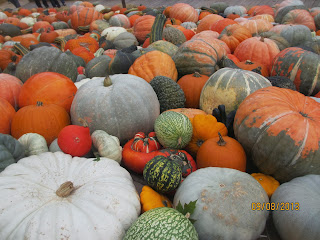 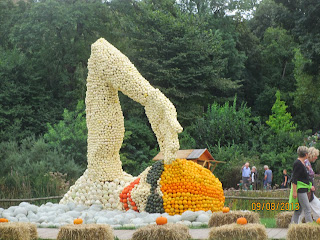 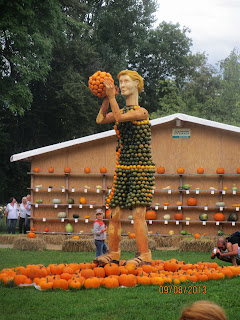 Not only were there great displays of multi-colored pumpkins throughout the grounds, there were also statues of skiers, swimmers, basket ball players, and various other sportsmen performing their sport and all made out of pumpkins.  There was a large food tent serving everything from Pumpkin soup, Pumpkin Quiche to Pumpkin Prosecceo.  Delicious!  What fun we had and good eats too. 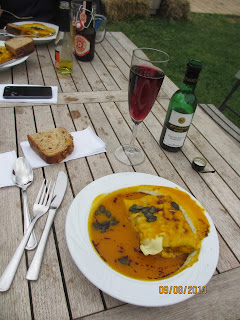 Sandy and Steve are a delight to be with.  Not only are they great hosts, they also laugh a lot.  Sandy is constantly taking pictures.  Whereas I take pictures of places and events, she takes laughing smiling pictures of the two of them wherever they are.  When I mentioned this, she explained, “I know, it’s a bore, but you gotta have a record.”  And I knew she was right.  So far Sandy’s ‘record’ is awesome! 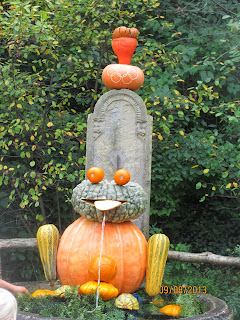 The next night it was a flight off to Greece and the exploration of the Island Ikaria, one of the world’s five Blue Zones.  Bring it on!

Posted by THE ETERNAL TRAVELER at 1:07 PM 2 comments: