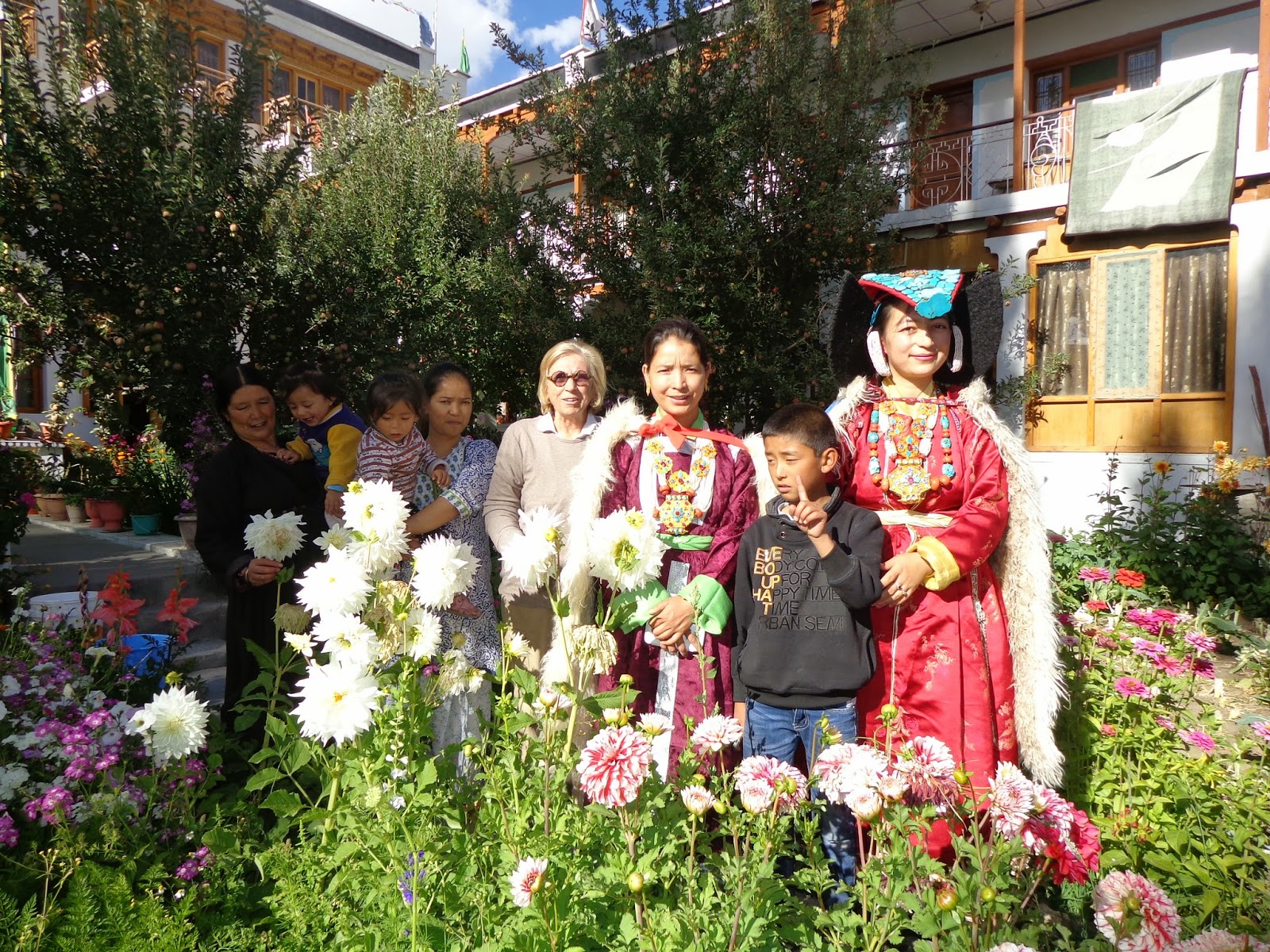 Women’s Ladakhi traditional wedding clothes are quite ornate.  The bride actually wears two dresses, one layered on top of the other.  One dress is given to her by her parents, the other by the mother of the groom.  Then added are special ear rings, a felt like hat the extends out like Micky Mouse ears,(Ladakhi friends please forgive my comparison) but sideways, and then added to this is a long head covering of turquoise and some jewels.  Below are my friends who are modelling their wedding their garb for you, my readers.

The bride wears a beautiful cape that is made of fine materials and sheep's hair. I am sorry I do not know the name for it.  When she is a mother of the groom, she will also wear a cape such as this at her son's wedding. 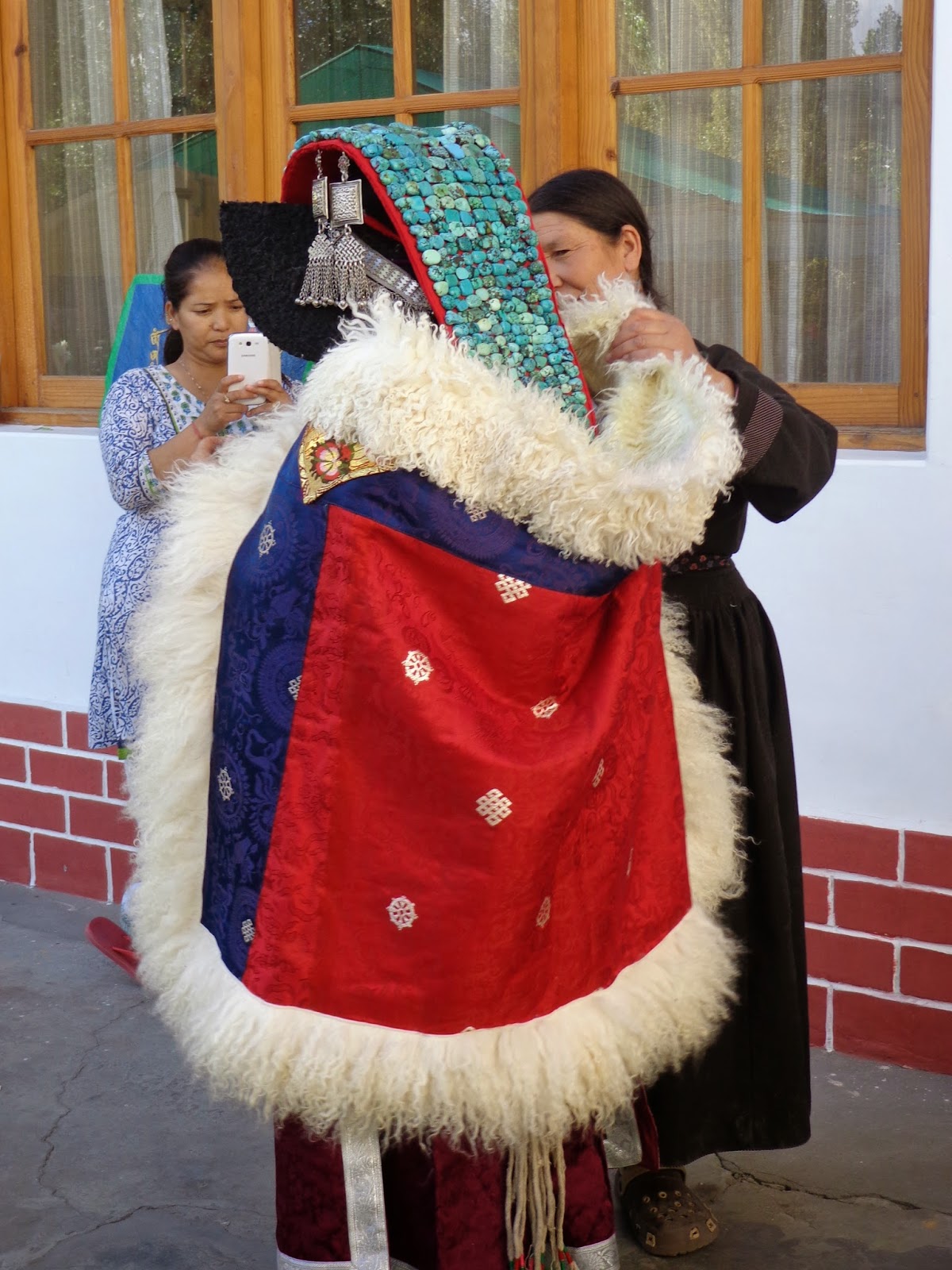 Dear Dorje and Dolma's family, I hope I got this all correct.

Next entry: LAST DAY OUT.
Posted by THE ETERNAL TRAVELER at 5:51 PM No comments:

Three Friends
On Sunday, Dolma, Dolma and I hired a car and off we went out to Traktok and Chemrey Monasteries.  Both my friends are Buddhist, so going to the two monasteries  was an important day of prayer and offerings for each.  My Dolma from Jigmet Guesthouse &Hotel dressed in her traditional Ladakhi clothes, whereas my other Dolma (not from Ladakh) dressed in her regular street clothes, yet each were equally devout.  On our drive to the two monasteries, we stopped at a small roadside shop so my companions could buy wicks and oil for the butter lamps as gifts to each of the monasteries.

First we went to Traktok ( some times spelled, Tak Thog) Monastery, which is 50 km (about 33 miles) from Leh.

I understand it is an old monastery, but as to it’s age, I have no idea.  The interesting aspect of Traktok is that is built right into the rock, or mountainside, if you will.  Although it is a small monastery, it has beautiful paintings both in and outside in the courtyard area. Inside is a special cave that is often used as a meditation sanctuary for a single monk.  This area is guarded by yak horns and is rarely open to visitors - only when a meditating monk is not in residence.

After our visit to this monastery, we were offered tea, then off we went to Chemrey Monastery which sits on a summit, with the surrounding Himalayan mountains as a beautiful backdrop.

At the bottom of the road we passed old and new chortens (stupa shaped Buddhist shrines found mainly in Ladakh), then up the steep drive, we passed typical little Ladakhi houses that surrounded two sides of the hillside. At he entrance to the gompa (another term for monastery) our driver parked and we entered, and went immediately to the top level temple within the monastery .  The whole monastery is protected by an historical spiritual teacher or guru. This guru of the monastery, had dedicated the upper temple to men only, so although we ladies could not enter, I was allowed to take a photo.


There are two other temples plus butter lamp and  book chambers which can be visited by the public.  Besides its beautiful paintings, Chemrey also has a small interesting museum with not only ancient war items, but  also old religious as well as everyday life artefacts. Unfortunately, photography was not permitted.

Chemrey, , has been in existence sometime before 1644.  Although major renovations were done to Chamrey between 1644 and 46. It is a branch of Hemis Monastery, which is the largest and most important monastery in Ladakh.  these two monasteries are dedicated to the druk-pa kargu sect of Tibetan Buddhism, which is the red hat sect of the His Holiness Drukchen Rinpoche.

After our visit, we were invited to have lunch in the dinning area of the monastery.  Lunch consisted of rice, dal, and a vegetable dish.  I always find it interesting that when one gives a donation to a monastery for your lunch, they always give a receipt on which your name and the amount is written.  I often wonder who checks these?

Soon we were on our way back to Leh, after a wonderful day out with my two Dolmas.

Posted by THE ETERNAL TRAVELER at 2:26 PM No comments: