Once I get it in my head I want to do something, I am tenacious.  I left London September 1st and in October, the Victoria & Albert Museum began a new exhibition, FABRICS OF INDIA.  It would end January 10th.  I couldn’t just fly back, that would have been thriftless. Yet I dreamed of seeing this exhibit, and pained that I would not.  After much mind jostling and rationalization, I came up with a valid reason for buying a plane ticket.  But I bought more than just a ticket to London.

I am in the middle of writing a new novel, the Sequel to DISPOSABLE ASSETS.  My books tend to have different geographical settings, but I never write about anywhere I have not visited.  I was determined to have one of the locations in the new book in a particular area in the Indian state of Gujarat.  An area I had tirelessly researched, Gir National Forest, home of the last Asiatic Lions.  But that was one part of India I had never visited.  Readers should be aware that Lions will most probably not come out during the hot (as high as 106 F) weather; which means I can only visit the Gir ‘lions’ in the dead of winter, (temperatures in the low 28s/82s in Gir) when one has a vague chance of spotting one of these handsome fellows.  Also, the capital of Gujarat, Ahmedabad is home to the definitive Textile museum in all of India.  Additionally I had also always wanted to visit the Andaman Islands, which although located between the Bay of Bengal and the Andaman Sea are nearer to Thailand than India, however still and Indian possession.  What better time to go than during the India winter when the temperatures are comparable to a Florida November day.

The plan became, buy a ticket to London, see the V&A exhibit, fly to Ahmedabad and visit the Calico Textile Museum in Ahmedabad, then go off and see Gir National Forest, with an added visit to Bhuj, a center of much of India’s hand specialty textile businesses, and the Kutch, then off to the Andamans.  Sounded good to me.

I returned from Christmas in Trinidad on December 27th and flew out of Ft Lauderdale, on the evening of the 28th on Norwegian airlines, which is probably the cheapest transatlantic airline flying today from South Florida.  Note:  I may not fly them again but more about that later.  I landed a little after noon on the 29th, and headed for College Hall near the University of London just a short walk from Euston train and tube Station.  It was mid afternoon by the time I arrived and settled into my room.  Although it was only three thirty in the afternoon, like so many northern locations world wide, darkness was falling.  The room was a standard modern dorm room with breakfast included but it had a shared bath, which somewhat concerned me. But not to worry, it worked out fine.  No matter how many people with whom I crossed paths at breakfast, and there were a lot.  I never met anyone in the shared toilet/bath.  I guess they ate, but did not deal in any other needs or personal hygiene.  Who was I to care, having my own bath with four separate stalls for each of the two main personal needs was just fine with me.

During the early evening I returned to Euston Station because, like all London Stations that are hubs for both trains arriving from outlying areas and the London Underground, it had numerous restaurants and food kiosks. After dinner, I settled in for the night, looking forward to seeing my friend Carol, who was joining me the next day at the V&A for The Fabric of India Exhibit.

We met at eleven and spent the day admiring some of the finest of Indian textiles in the world.  India has produced textiles for 6000 years, and exporting materials to China, Indonesia, Egypt and the Roman Empire since ancient times. The fabrics displayed in the exhibit represented the influences over the centuries of Mogul Empires, religious sacred cloths, traditional clothing of the main Indian handmade textile producing areas, as well as patterns that reflected the styles of their global trading partners, and the adoption of traditional techniques to modern fashion needs.  Heirloom fabrics displayed in the exhibit included handmade specimens from as early as the third century AD, and designer examples of Indian materials in modern day fashion.


After a very pleasant late lunch at the museum restaurant, we parted and the next day, I spent at the British Library conveniently just around the corner from College Hall. Carol informed me that there was an interesting tour one could take of the library itself, but it was not happening on the day of my visit, so I will have to look forward the library tour during my next visit to London.

The exhibits at the library were of the history of West Africa, 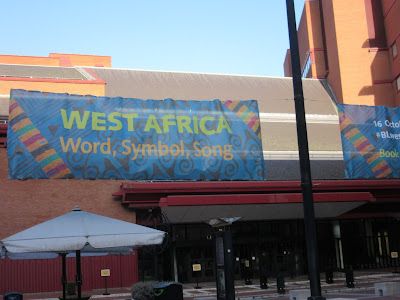 as well as a presentation of the Book of Alice in Wonderland, different editions and displays of creative springboard items related to the story of such world wide fame.  Neither exhibit measured up to the ones I had enjoyed there in the past.  The Africa focused more on the history of the music, than on what I would have found, a more in depth history of the countries represented in the exhibit.  As for the ‘Alice,’ presentation, I felt that although they displayed lots of different editions of the tale, they did not have enough unique items to make it the imaginative presentation I would have liked.  Maybe some example of video renditions of the story might have been a nice added feature.  I am not a curator, and this exhibit was about the ‘book’ and the characters in it.  So who am I to say?

After enjoying the British Library, I was off to Gatwick and a 10PM to Dubai and then Mumbai on New Year’s Eve, traveling east where welcoming the New Year had already happened, heading toward a new adventure.
NEXT: AHMEDABAD & INDIA'S CALICO TEXTILE MUSEUM

Posted by THE ETERNAL TRAVELER at 1:51 PM No comments:

WHAT I DO WHEN I'M HOME: VISIT WITH FRIENDS NEAR AND FAR!

BACK IN AMERICAN: GOING NORTH

Upon my return home in South Florida, I had rush down to Trinidad for my Grandson’s Birthday (we have a rule, no pictures of the little kid until he is old enough to decide himself to be on social media) .

Then it was the beautiful wedding of my dear neighbor Layton to her to her true love Jimmy.

Next, it was time to make my semi-annual to visit to my dear friend Joan who lives just north of Asheville, North Carolina.   The drive is about 1200 miles, however prior to my leaving, there had been a big storm which caused major flooding along south eastern I95, the major north/south highway on the east coast of the US.  So I decided to travel the more inland route, I75, to northern Georgia, and east across Western North Carolina to Hendersonville, then north to Joan’s just north of the small village of Barnardsville.

This also gave me an opportunity to visit with my friends Joe and Claudia who reside with their menagerie of dogs and cats in the very north Georgia town of Hiawassee.

After a brief visit with my friends, I headed north and east.  Entering North Carolina State Road 64 East, which headed toward Hendersonville. As I drove, I realized I was traveling on an Appalachian Mountains road.  It was a higher, more curvaceous road than I had driven on in a long time.  Although I entered the road during the mid morning, the dim, thick forest shrouded my way.  Soon the road became cavernous, a crescendo of tree colored leaves hung over the highway; cranberry red, pumpkin orange, amber, corn cob yellow, pine tree green, and some elusive coral leaves undecided on whether to be red or orange. Rays of light filtered through the thick forest creating dappled beams on the road ahead.  Was this the kind of forbidding forest, which enveloped storybook characters who ventured into the deep dank woods in tales of old?  I wasn’t sure.

I was delighted to reach the lovely Highlands and make the turn to Cashers, two mountain villages I had not visited in over forty years.  The development around these communities forced much of the foliage a bit back from the road and the route to become more welcoming. As soon as I neared Hendersonville, with a sigh of relief, I called my friend Hester with whom I was spending the evening.

Hester, my daughter’s Godmother, met me in front of the Hendersonville Fresh Market. An octogenarian going on fifteen, there she stood by the side of her car, wearing dangling pumpkin earrings and a white shirt with a the picture of a black ghost on which was imprinted ‘BOO.’    Over a great dinner, we shared our news of the last six months.  The next morning off I went to Joan’s to spend a week with my dear friend.  Joan is a comfortable and wise person with whom I share over 50 years of history.

On a day when Joan had some personal appointments, I visited with another mountain friend, Yame.

During my return home, I again stopped at Joe and Claudia’s with whom I enjoyed a great day in Helen, Georgia, a replica of an Alpine village.

My final two stops were Mount Dora for a short visit with my old friends of many years, Paul and Jo Anne White, and in Orlando to visit with another dear friend Sue Moss.  Soon I was home again; glad to relax in my own personal space.