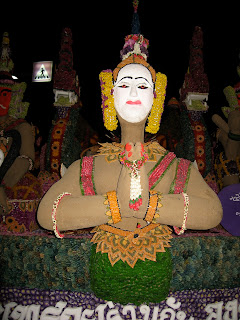 Northern Thailand
Chiang Mai
Today I am off to meet Samantha, my daughter and favorite traveling companion, who is flying into Bangkok from New Zealand, where we are catching a late afternoon flight to Chiang Mai.


Previously, we have only gone to Bangkok and the beaches of southern Thailand for diving, now it seems time to explore the mysterious north.  I have heard it is a beautiful historical area, the center of the LAN NA culture with a wonderful climate, a large number of retired expats, and many European winter tourists.  How could Chiang Mai be missed.


We arrived during the annual International Flower Festival, a vast outdoor affair which is part carnival and street fair with marvelous flower displays; unusual flowering plants, cactus, bonsai, trees and enormous floats made entirely of flowers. It is the last big night and although exhausted, off we go to see the show.  As we jostled though the massive crowds our tiredness abated and we are treated to fantastic food and beautiful and unique foliage.


Because of the festival getting hotel rooms was almost impossible unless of course I wanted to spend $150 or more per room per night.  Not!  Finally I obtained rooms at MD House, which I would rate near the bottom of guesthouses I had so far experienced, not because of the guest house itself but rather because of their billing and breakfast policies, and five days of unpleasantness caused by their very own  ‘Dragon Lady’ in residence (see Sleeping Around).


During our wonderings, we found bits and pieces of the old city wall, but these are generally located near where the four original gates formally stood.  The original moat is still around the whole city, which is a perfect square, with an interior area of two square kilometers.  With the rise of modern transportation the moat became a traffic obstacle, but that problem was solved by putting one-way roads along both the inside and outside perimeters of the moat.


Trekking is a big draw in the area and some guesthouses make such big commissions from the trekking companies that if the tourist does not make a trekking deal, they will be ask to move hotels after three days.  There are also private elephant parks, but tourists must be careful to check out which are for the conservation of the elephants and which exploit these beautiful beasts. The Elephant Nature Park rescues abused elephants.  Therefore, animals at this park are not required to paint, dance or give rides. But rather elephant lovers have a rewarding educational experience of learning about elephant behaviors and abilities, feeding the animals, washing them in the river and playing with their babies. Being a great cat lover, I was drawn to visit the special tiger sanctuary where I could actually pet the tigers, but then I found out that their claws had been removed and that these poor animals were kept in small cages when they were not ‘entertaining’ tourists.  Sorry about their circumstances, I could not go.


Since most of the animal parks were unacceptable to us, other than masses of interesting WATS (Buddhist temples –must be one on every other street corner), one really sensational Burmese restaurant, great night shopping markets with large outdoor food emporiums, and the elephants and hippopotamus’s at the Zoo, during our first five days, we missed Chiang Mai’s charm.  Then it was out of ‘Dragon Lady’s clutches and off to Chiang Rai.
Chiang Rai
Chiang Rai is a bit of a backwater town in the northern part of Thailand.  I had heard and read that ‘there’s not much to do here,’ but both Sam and I are inclined to disagree.  Because of it’s size, it is much more maneuverable than Chiang Mai, and with a good map, it is a great place to walk to local the WATS, museums, restaurants and the in- town bus station.  It is also a good base for tours to the Golden Triangle (we had to skip this because Samantha’s passport was at the Myanmar Embassy), where the Burmese (Myanmar), Laos (the ‘s’ is not pronounced), and Thailand boarders meet.   Historically, this was the center of the world poppy growth and international opium trade beginning after WWII.  Also from Chiang Rai, one can tour tribal villages, take a boat ride up the Mekong River or go on a bike tour to the White Temple.


Chiang Rai has two interesting museums, the Hilltribe Museum and Education Center and the Oub Khan, a private museum dedicated to the heritage of the LAN NA Kingdom (Northern Thai Kingdom from 1262 to 1774).


Much of northern Thailand is populated by hill tribes and the Hilltribe Museum concentrates on the six major hill tribes in the area, their agricultural and cultural activities, the importance and uses of Bamboo, ‘the truth about the Long-Neck Karen people’ (Many of these people, some imported from Myanmar, suffer the layering of rings on their necks just for the tourist trade), and the dos and don’t when visiting a tribal village. Because of the influence of opium in the area, the museum also focuses on the history and uses of this drug, which is fascinating.


AND NOWwww let’s talk about Strawberries!  Everywhere we went in Northern Thailand, there were rich luscious looking strawberries for sale.  This was because of the King.  Forty years ago, when King Bhumibol visited Chiang Rai, he found that most of the Hill tribe people were growing opium.  The king decided it would be much better for these tribes to grow a legal fruit rather than and illegal substance that killed.  They first tried peaches.  Then in 1957, strawberries were brought to Kasersart University in Bangkok and an appropriate strawberry was developed for Thailand’s highlands.  Strawberries have replaced opium as the premier product of Northern Thailand, although Burma (Myanmar) continues to be a major opium producer.


Down stairs from the Hilltribe Museum is the Cabbages and Condoms Restaurant.  At the entrance, who else, but a statue of Captain Condom greets us.  Except for his mannequin face, he is made entirely of bright orange and yellow condoms.  Opposite him is a Santa Claus statue.  His suit is also made of condoms in traditional red and white.  As an added incentive in curing the population explosion, on the wall is a large rectangular poster picturing the right condom to use depending on your particular profession.  I assume this could be particularly helpful to those who waver or prefer the exclusivity of a special condom just for them; i.e. the doctors’ condom, the dentists’ condom and so on. As for the menu, it looked very tasty, but we only had drinks, so I cannot really be sure.
In the center of town is a large night market, which surrounds an ‘L’ shaped outside food emporium.  Divided into two sections, one is service only, while the other has a series of self-service stalls.  Both have seating in the middle and both serves mediocre food. Each section also has it’s own large stage on which charmingly cheesy acts perform; native dancers, lip sinking girls in western evening gowns, a guitarist/ singer, with each act switching from stage to stage, so no one misses out.
One of our most delightful adventures was taking the local bus 13 kilometers outside Chiang Ray to the White Temple, a mix of Liberace, Disneyland and Buddhist/Hinduism. Amazingly stunning, with it’s silver, sugary white exterior that sparkles in the sunlight and it’s large Buddha seated inside surrounded by fearsome Hinduquse interior wall paintings.  Its official name is ‘Chapel of Wat Rong Khun.’  The Thai artist, Chalemchai Kositpipat, began this modern edifice in 1994, and like Gaudi’s Sagrala Familia Cathedral in Barcelona, it is another imaginative work in progress.  The White Temple is one of those fanciful world tourist venues like the City of Venice and Florida’s Disneyworld, that is a must see for the discerning traveler.  After experiencing the temple’s tourist shops, the artist’s art gallery (with a great painting of GW Bush and Ben laden flying across the sky sitting together on a on a rocket), and a noodle lunch, we took the local five PM bus back to Chiang Rai.
The food here is not sensational with the exception of The Old Dutch Restaurant.  Walk in and you are automatically transported to Holland with walls covered with Delft blue artifacts, tulip and windmill pictures and a furniture décor that must have been shipped direct from a Dutch furniture factory during the 1970s or 80s.  The menu has a plethora of traditional Dutch/European dishes as well as local Thai fare.  To get a table is a major feat, yet the 70-year-old owner who has been running the whole operation for thirty years would like to sell.
If you like to cook and would like to step into a thriving restaurant in a charming town with nice people and great weather, here’s your opportunity.  As for lodgings, we stayed at the Baann Warabordee, a really lovely guesthouse a little off the beaten path with many of the amities we enjoy (See Sleeping around).
After five really busy days, in Chiang Rai, it was time board the bus for our five and half hour return to Chiang Mai where we looked forward to four more boring days before we flew off to our Myanmar adventure.  At least I had made reservations at Mini-Cost a marvelous hostelry with guesthouse prices and four/five star accouterments.
But wait!  The next day as I sat outside an upscale establishment on a little street Sam had read about, I perused a table of local magazines.  There I found one entitled ARTS and CULTURE in Chiang Mai.  Finally!  Mecca; I had finally hit pay dirt.  Their secret was out.  Upon opening this compendium of local knowledge, I found it was all advertisements for Antique and upscale clothing stores.  SHOPPING!  That’s what it was all about.  “Wait tell I tell Sam,” I thought.
Over a glass of good wine nurtured by great food (we had found Hong Touw Inn, a second wonderful restaurant [See Eating your Heart Out]), I showed Samantha the brochure.  We are not much on hiking, climbing or camping, but we are hellious shoppers. And shop we did!  Ferreting out charming little dress shops, trying on linens and silks, and negotiating better prices when we bought two or three items from one of these delightful establishments.  We walked away with dresses, and jackets, shirts and antique silver jewelry.  Bundles of great buys, that we just couldn’t do without.
Chiang Mai had finally become fun and we were now ready for our next adventure: Myanmar.  Would it be as good?  We didn’t know.  All we could do was wait and see.
Posted by THE ETERNAL TRAVELER at 1:44 AM