A ladakhi Wedding
Kashmir Jammu state is in the northwest fist shaped section of India, bordered by Pakistan and on the west and Tibet on the east.  In the southeastern part of this state on the Tibetan border is India’s autonomous region of Ladakh, a mountainous moon-like landscape geographically part of the Tibetan Plateau.  It has about a four month summer, then it gets progressive colder until it is minus 34 digresses Celsius in the winter with no access to the out side world except by air.
A Ladakhi Wedding is more than the joining of two wonderful young people.  It is the coming together of a community for the common good of the charming young couple in effort, mind, and spirit.
In Ladakh, like much of India, most marriages are arranged. *  In Ladakh, once a couple is introduced, they court for a year.  If they feel theirs is a good match, the marriage ensues.   My friends, Jigment and Angmo had crushes on one anther since grade school, which developed into love.  Unlike most Ladakhi couples, they asked their families to arrange a marriage between the two of them, and both families agreed.  Angmo is 27 and Jigment 29, and yet he giggled with happiness throughout most of the ceremony, and she, although extremely serious during the entire event, told me that yes, she was as madly in love as he, and that even in grade school, “he was the smartest boy in the class.”  Now that’s true love. 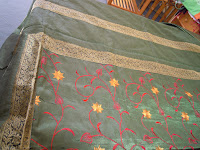 As soon as I was emailed the date (September 19th), I cashed in my train ticket to Bangalore and rushed back to Delhi to search for the perfect gift.  Previously, I had decided upon a bed cover. After much searching, I bought a hand blocked somewhat geometric design on hand spun material in red and black at The Shoppe, but I wasn’t quite satisfied with my choice.  Then Ajeed, my favorite auto rickshaw driver dropped me at one of the stores that give drivers a gas chit if they bring a patron who spends at least fifteen minutes in their shop. The very first coverlet I saw was an emerald green silk, imbedded on the sides with two bands of gold design and on the top yellow cornflowers with musically shaped embroidered red stems. Previously, I had seen Angmo, the bride, wearing these exact colors at a party, and she looked stunning.  This was it.  But I let them show me a few more covers so I would not seem too eager.  Finally I stopped my charade and negotiated the price.
Because of concern for cloud cover over the mountains, most flights in and out of Leh are in the early morning, so my arrival at Jigment Guesthouse at 7:00 AM was not surprising.  I had arrived two days early, so I could adjust to the altitude.   But this time, I had taken altitude sickness medicine two days before flying, so I had very little need to be inactive for the first two days like I did during my visit earlier in July.
When I arose midmorning from a much-needed rest, I went down, greeted everyone, and had butter tea with the family.  After Tering Dalkar*, Jigment’s sister went off to work, Disket Tsomo, his other sister, his mother, Tsewang Dolma and I went up to decide if either of my gifts was adequate.  If not, I would have to go to the market with Disket and find something more suitable.  This was the moment of truth.  I had brought both covers.  I opened the hand printed cotton one and there was an obvious lack of enthusiasm.  Then with baited breath, I opened the emerald green silk.  It was a smash hit.  Disket wanted to know the price, and Dolma exclaimed that even with all the lovely Kashmiri items found in the Local shops, there was nothing quite like it for sale in Leh.  Later in the day Jigment’s sisters told me to give him the gift at 7 PM on the evening of the wedding.
Now that my anxiety about the gift was abated, I got out of everyone’s way and went to the post office to mail home the rejected bed cover to be used in my own home as a summer substitute. The local post office computers were down because of no electricity, so I trekked off to the main local market, crowded into a jitney taxi for ten rupees (about 20 cents) with the locals and headed for the main post office on the edge of town.  There, they boxed and mailed my package. Then I returned to town and stopped by to see my friend Karma Dolma in her shop.  Ever enthusiastic, she was thrilled to see me and ordered tea.  The rest of my day was spent wandering through Leh, where I found many shops were already shuttered for the season.  Finally, I went to the local’s market and bought a new backpack.   There I could get a great pack for 500 Rps, around $10 dollars. Whereas on main street where the tourists shopped, I could buy nothing for less than 1800 Rps, about $36, and most backpacks were much more expensive.
The next morning when I got up, the garden was abuzz with activity. All of Jigment Guesthouse’s friends, neighbors and relatives were already hard at work preparing for the big day.   Religion was not a barrier, as both the Christian and Moslem neighbors were there working with this Buddhist family.  Jigment was one of the neighborhood children whom they had watched grow and mature from small tot to adulthood. Besides it was going to be a big party of 250 people with all the neighbors invited. 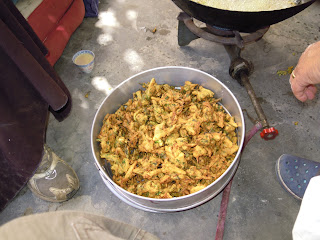 As I was a guest, I was not allowed to help.  But I watched as vegetables were being chopped, veggie treats, called Pakada, were being fried and Pappadrums, and Ladakhi bread were cooking in the back kitchen.  Five or six women had come the day before and made hundreds of cookies, and all of this food were just the pre- dinner snacks. 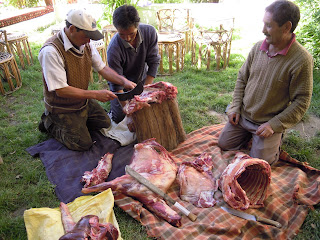 Several men were butchering a sheep in one of the grassy gardens, which would be part of the main dinner.  Dell, Tering Dolkar’s husband, had already begun preparing doe the main buffet at the outdoor kitchen in another part of the garden. Men were stringing lights outside, and moving small tables and Tibetan rugs into the new hotel dining room.  Meanwhile on one side two ladies were squishing water out of strips of newly carded and crushed wool, and in another back garden an old man was stomping sheep’s wool and water in a bucket much like the bare foot crushing of grapes in a tub.   I wandered off again.  After my daily visit with Karma and her shopkeeper neighbor Nazir from Kashmir, I headed out on a long country walk past Shanti Stupa, and ate a late lunch at a charming bistro on the edge of Leh.  When I returned Jigment and his best man, Shakya, were trying on Jiggie’s wedding togs, first one and then the other tried on the royal purple robe.   A sound system had been installed, and then during the late afternoon all work stopped.  A monk* had arrived and everyone sat on the rugs in the new dinning room and listened to his teachings. 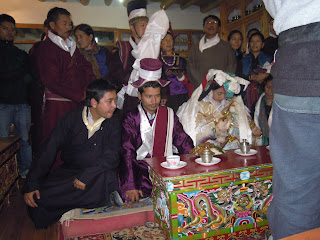