During mid October, my friend Nancy Jo arrived in Delhi for three weeks travel in India and Nepal.  The itinerary had been planed ahead, hotels booked and adventures discussed.  Even though I am an early raiser but late to leave my room, Nancy is out with the ‘golden sun’ to take pictures, so I spent three weeks not only up but also out most mornings at 5:30 a.m.  After all, I could not have her wandering off alone to tangle with an inquisitive morning cow or be run over by a wayward auto driver.  I had promised Alan, Nancy’s husband, I would take good care.  After all, I was responsible.

But it worked out well. Off we went every morning, Nancy Jo wearing her khaki  ‘white hunter’s vest’ with her reasonably large camera slung around her neck, smacking of ‘tourist’, while I continued to dress in my low key borderline grunge, squiring her throughout New and Old Delhi from Khan Market to the more exotic Chandni Chowk.  From the Red Mosque, through ancient alleyways of 17th century Shabjahnabal, or old Delhi which was built before the British Colonization, India’s Independence, and the very bloody Muslim/Hindu Partition in 1947, which left a million dead and India divided into two, now three separate countries: India, Pakistan and finally Bangladesh.

Old Delhi is the old Muslim quarter where remnants of Islamic architecture can be found, many of which are now in ram-shackled condition.  Where the savvy tourist can occasionally spy the big heavy studded doors, minor minarets, and curved and arched entryways of romantic Arabic picture book fame that still exist.

Except for the massive crowds Old Delhi is still secretively mystical in it’s own way.  Wandering this labyrinth of narrow alleys, we stumbled upon a working Jain Temple during an afternoon ceremony.  Only about twelve men participated, dressed in white sari like robes, they sat misty-eyed, drumming and singing their prayers. Ritual food of rice, banana and a miniature sweet bun in a banana leaf bowl was passed to us.  “Eat,” someone whispered between their prayers and we did.  Unbeknownst to the worshipers, Nancy Jo, with her camera on her lap set on play, filmed their service.  A rare bit of footage, I am sure.

After quietly leaving, off we went again to find the Jain Svatambara Temple.  I was determined to show to Nancy jo this temple as it was considered the most beautiful Jain temple in Dalhi and maybe alll of India.  The religious art inside is most unusual and unbelievably spectacular.  Finally we found it, and for a ‘tip,’ a razor thin priest (these Janis as well as being vegan vegetarians, also do not eat onions or garlic) was not too busy and gave us a fast tour.  One is not allow to take pictures, so I go there as often as I can to bask in the artful loveliness of the temple whenever I’m in Delhi.  As an aside: There are two sects of Jainism, the Svatambara in which the priests wear white.  The word Svatambara means wearing white.  The other sect, the Digambara believe in wearing nothing at all.   The alleyway where the temple is located also has a number of pastel painted residences, owned by local Jains.  One of which belongs to a Jain jeweler. After our temple visit, we stopped in the jeweler’s shop and among his loverly hand crafted items, Nancy Jo found a beautiful silver cuff bracelet studded with small semiprecious stones.
We continued our tour of Delhi with a visit to the Crafts Museum (great – don’t miss it), and the National Museum (a waste of time – only three rooms were opened for viewing although we were charged the full entrance fee and there were masses of individual workers within the building).  Another day was filled with shopping in Kahn Market at Fab India and Anoki with lunch at Mama’s to Go, and a personal revival visit to my favorite local hair dresser, Dolly (or Dolma –princess in Tibetan).

We took a three day tour that included the Taj Mahal and neighboring Red Fort in Agra.  The Taj was beautiful as usual and my visit was much more enjoyable than previously, as there were fewer tourists.    Then it was on to Jaipur with it’s pink palace, and the Amber palace in a neighboring village, where we had to ride and elephant up the hillside to enter.  I most enjoyed Jaipur’s Astronomy Museum, a wonderful outdoor museum just across the road from the Pink Palace, an estounding venue one generally never hears about. 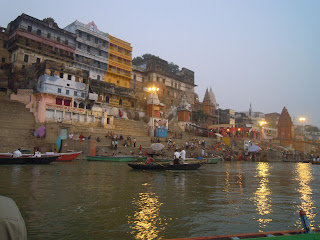 Then it was on to Varanasi for five days (four would have been enough) to see the funeral pyres, visit special temples, and indulge in the aura of the place, which is exotic to say the least.   People come from all over India to honor their loved ones by having them burned on the funeral pyres called Ghats; a more purifying step to nirvana then to have them cremated at their local temple pyre.  Varanasi, which borders the Mother Ganges River, is the holiness city in the whole of the Indian Hindu religion.  Yet there are some who are too holy to be burned and instead their dead bodies are dropped into the Ganges to float off to nirvana in their special holiness: children under age four, pregnant mothers, Sadhus a certain sect of holy man, Lepers and those with small pox, and animals.  Many tourists like us take both morning and evening boat rides on the river to experience, in the morning the ritual washing of the body in the holy waters (mostly men), and in the evenings the religious rituals, architecture and the ghats as they burn in the moonlight.  There are three ghats on the river’s edge and these are used to cremate the dead twenty-four hours a day, everyday of the year.  Gigantic piles of wood are stacked at the end of the streets behind the pyres and are continually replenished daily to supply the incredible amount of wooden logs necessary to maintain the funeral Ghats.

During a visit to the Sahdus’ temple, we passed a amall room in which lay and old Sahdus who’s face I had seen many times before on postcards and large posters throughout India, but had never learned his name.  The young Sadhus who gave us the tour of this holy (yet very dirty by western standards) temple had lived here since age seven; going out on occasion across the country with only the clothes on his back and his tin pail, begging for food and bits of money,  praying for those he met on his way.  Yet he always came back to his home temple, contently happy in the belief that this was the only way of life for him.

Then it was on to Kathmandu, Nepal and one of my very favorite Hotel/Guesthouses in the whole world the Ganesh Himal.  To visit with friends and share with Nancy Jo local historic villages I have mentioned in previous posts, (see previous Kathmandu and Nepal entries) and also visit the second largest town in Nepal, Pokara.  All of which were wonderful as usual.
In Varanasi there were many women who clean up the Cow dung, which riddles the streets in their neighborhoods every day,  and form it into patties.  Laying the patties out in rows along the streets, they dry the patties in the sun.  Later, these women sell the dried patties for cooking fuel or for home heating in the winter.  It was after the experience of seeing these industerious women that I returned to Broken Sound an Upscale gated community situated in my hometown.  There they have special green machines from which community dog owners retrieve little green bags to pick up their dog’s excrement and then deposit it in other special trash containers just for dog dung.  How shocked those Varanasi ladies would have been to see this waste of such a valuable commodity?  Two different worlds.
Posted by THE ETERNAL TRAVELER at 2:56 AM