Previously I stated in an earlier Thoughts Post, that the Higganis Family in Afghanistan (They are located in the Borderlands between Pakistan and Afghanistan and Afghanistan proper) would probably take over the country upon the removal of our troops at the end of  2012. This family, which has both criminal activities as well as legitimate businesses, has just been put on the US list of terrorist originisations. Rather than a terrorist group, from what I have read, they seem to be more like the Mafia  who only terrorized the local people to keep their power and business enterprises going.  Of course with the vast amount of poppy cultivation in the country, that does give an international bent on Hagganis family operations . Will the designation of 'terrorists' by the US weaken the strength of this group?  I wonder, as the Higganis family is, other than the Tiliban, the most powerful group in the area.  But US strategic analysts are at least aware of their influence.  Once NATO leaves we cannot really control how this country is ruled nor should we.  But it is obvious that the average citizen will have little say over the future of their government.  The Higganis Family and the Taliban both want to control Afghanistan. Some of my questions are: Will there be a war between these two factions for supreme power over the country?  Or will the two make an accommodation with each other of shared power? What is the best outcome for the general citizenry of the Afghanistan?

I read in the Monday, September 3, 2012, Jakarta Post that the US is going to build a military base the size of the state of Connecticut in Australia.  After reading this once, I have never heard or read a reference to this military base again.  Speaking to Aussies, they have heard nothing about this either.  Any reader heard about this?

Hundreds of Myanmar Monks staged a rally in Mandalay supporting the their president’s proposal to send members of the Rohingya Muslim minority to another country.  Which country was not named.  Myanmar has numerous hill tribe minorities of different faiths.  Many have been fighting the Myanmar (Burma) government for years.  Case in point: Many of the Sharon Tribe live in a ‘no man’s land’ between northern Thailand and Myanmar and neither country will accept them as citizens.  (Also Jakarta Post, September 3, 2012).

The question I get ask most by foreign friends and travelers I have met during this latest journey has been “who will win the US presidential election?”  Of course I do not have a crystal ball, but if the people I talked to (mainly Europeans and Aussies) were allowed to vote Obama would win by 100%.

I have a new friend, Asha, the fifteen-month-old daughter of my friends Agus and Diah at Teba House Home stay in Ubud, Bali. 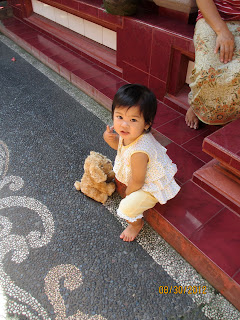 Posted by THE ETERNAL TRAVELER at 7:29 PM