IKaria is one of the five Blue Zone areas of the world. These are five areas around the world, studied by the US National Geographic Society, each of which have populations that live exceedingly long life spans.  Not only do many islanders in each of these communities live well into their 90s, some are100 years or older. They also enjoy this longevity without suffering the usual old age ailments of many individuals in our modern western world:  cancer, heart disease, high blood pressure, etc., (read Blue Zones, NY Times article).  They often die during sex or in their sleep, which sounds good to me. I have read that people who retire with no purpose in their life (hobby, compelling interest) find themselves lost without something to do with their time, and generally get a major ailment within five to seven years and then it’s ‘curtains;’ Kaput!  End of the line! Now, THAT doesn’t sound good at all.


But in Ikaria, the locals have daily purpose.  Although it is a dead volcanic island 3500 ft high, it is mainly an agrarian community.  Inhabitants rise with the sun, take care of their animals, gardens and collect wild herbs, then return home for lunch. After an afternoon nap during the hottest part of the day (the nap seems to be very important to their daily routine), they go out and again tend to the needs of their animals and crops.  As the sun descends they are off to take care of their business in the shops, many of which do not even open until late in the afternoon.  Businesses in one village, known as Raches or Christos, often stay open until 3 a.m. in the morning so people can do their shopping and socialize with friends and neighbors.  Many locals claim their longevity is aided by drinking at least three small glasses of their local red wine daily, which has no added chemicals or sulfites. Additionally, the University of Athens’ chemistry department did an analysis of the herbs that grow on the island and found they have the highest medicinal properties of any so far tested.  The air is particularly fresh and clean and the Mediterranean waters are the same.  The Ikarians are a happy friendly people whose lives seem to flow with the rhythms of nature.  Nary a watch did I see.

The National Geographic team who came to study the island and its inhabitants stayed in the small village of Nas at THEA’S INN located near the eastern end of the island. Who was I to be different?  So I booked a room at Thea’s with breakfast and off I went, flying from Stuttgart to Athens, arriving at midnight and flying the next day on an afternoon flight to Ikaria Island.  The room rate was reasonable but sticker shock set in when I found that Nas was about 70 miles from the airport, and the taxi cost about a dollar a mile.  Wow! I had no idea.  As with many things in life, it was what it was and I was pleased to have a driver who was an affable companion and tour guide. In fact, I found during my entire stay, that everyone on the island was a carbon copy of this fellow, nice.


Nas is a caricature of a village.  It is so small one would probably miss it if it weren’t for the fact that it is at the end of the road.  Actually, there is a connecting road if one makes a sharp left.  However, if one were to continue driving straight on the road through Nas, he would eventually fly off a cliff landing on a rather pleasant nude beach.  Circuitous to get to by foot, yet once there, fun to observe the inhabitants and enjoy an afternoon swim in the cool fresh sea waters of the ‘Med.”

Like a nesting dog who circles around three or four times before he settles comfortably, I behave much the same. After weeks of the bright lights of pumpkin festivals, concerts, museums and castles of England and Germany, during my first three days in Ikaria, I was OMG, why have I stuck myself in this bland European backwater? Then it dawned on me, what a wonderful physical and psychic oasis Ikaria is.  Quiet and restful – a place to read, write and think, full of long walks – treks for some, great food, interesting landscape and lovely people.  What more could one ask for?  And that’s what I did – all of the above and loved every minute. Perfect! Also I met some other interesting travelers.

As for Thea’s Inn (www.theasinn.com or on facebook: Thea’s Inn), it is one of those great places not only to stay but also to be.  Thea and her husband Ilias have created a hub for tourists, locals and island returnees who want to eat great food, and hang out, sometimes till one or two in the morning. Dining, drinking, chatting and even dancing, yet I was never up that late to hear or observe the convivial goings on that I am told often lasted long into the night. Although he in no way encourages it, Ilias is one of those handsomely muscular men that I have no doubt the single female guests have holiday fantasies about. Whereas Thea, born in Detroit, Michignan of Ikarian parentage, is one of those unsung lovely beauties, who has missed her calling as a national talk show host: engaging, gracious, yet straight forward, and full of some of the most delightfully infectious laughter I have ever encountered. (Where are you NBC, ABC and CBS?)  They are delightful hosts. The rooms are simple, yet comfortable: private baths, hot water, nice hard beds, small refrigerators, an electric pot for one’s morning tea/coffee, and individual balconies on which to enjoy quiet mornings, afternoons and some of the greatest sunsets I have ever enjoyed (Santorini not withstanding). 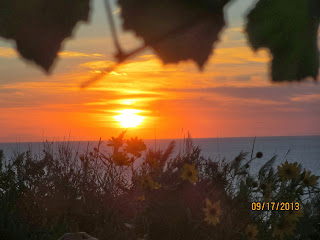 Ikaria is not really a tourist island, not compared to Rhodes, Mykonos, Santorini and Corfu.  On the website Trip Advisor.com, one may find listed ten hotels and ten bed and breakfasts/inns. Even though there are tourist shops, I was hard put to find a post card to send to my friends.  Although I met Australians, a few Americans and a Greek Cypriot, the main visitors are Germans who like to hike (an island of many trails), former Ikarians who come back to spend time with families or retire, occasional Europeans, and now those pesky Americans who, after reading about the Blue Zones like me, are eager to come and learn more.

The guests were an added enjoyment to my two week sojourn: from Berlin, Christian and Katherine, he an architect who actually designs the interiors of museums and she an architectural student; Neal and Katrina, classical musicians from Australia who had spent a year in Germany and were on their way home to Sidney, Tanya and Bernie, Americans, he a former minister: find Bernie at bernie@empowermentexperts.com.  Tanya is an incurable trekker on her way to a trek expedition in Southern France; Pamela, from California and her friend Ludmila both Linguistic professors – Pam is also the authority on the relationship of Ikarian Greek to the Ionian Greek dialect;
and Paul Lewis from England, who might be considered Ikaria’s summer resident artist, who does smashing water colors of island scenes and also teaches painting classes around the island.  Enjoy his work at: www.paullewispaintings.com. Lastly, a fascinating couple Ella and Vladimir, originally from Russia but American citizens for many years who are lifetime vegans and practitioners of Yoga, who explained the four different forms of that particular sport/art to me (below).

There are 4 different types of Yoga.
“The word Yoga in Sanskrit means 'Union' - union with the Divine.  This Union can be achieved through the 4 different paths. The first the path of Yoga is called Hatha Yoga, achieving the Union through the total control of the body.  This is the type of Yoga that is well known in the West and becoming very popular here without really understanding its ultimate purpose.
The second type is Karma Yoga - achieving the Union through the path of action.  The actions are performed with total surrender, when the person surrenders the fruit of the action to the Lord and is performing the action solely as doing one's duty without any expectations for the fruit.  The Lord is the doer and the fruits are His, whatever they are.The third type is Gnana (Jnana) Yoga.  In either case the first letter is silent.  This is the path of wisdom.  The student studies the Scriptures and, with the Guru, grows in wisdom. The last and the highest type of Yoga is Bhakhti Yoga - the Yoga of Devotion,
devotion to God.  This is the easiest, shortest, and next direct path to God.
Vlad imir and Ella study Bhakthi Yoga.”

So you can see Ikaria was not only a holiday but also became a rejuvenation for my spirit through the interesting people I met and also the aura of the beautiful island itself.
Will I return? They can’t keep me away.  However, I shall also rent a car during part of my visit, and you should too!
. 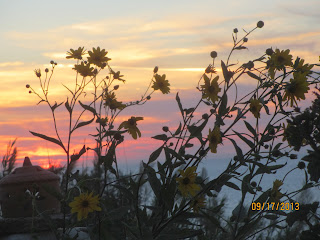 Posted by THE ETERNAL TRAVELER at 10:47 PM