BHUJ
I left the Gir National Forest area around 10 AM. After traveling about 40 kilometers on a single lane road, we entered a four-lane divided highway.  I was guaranteed a driver that spoke some English but was not surprised to find that his only language was local Gujarati of this Indian state.  Not only did he not speak English, he could not read it either, and all the road signs were in the English language.  The only communications we had during the whole 11-hour trip was my poking him to get his attention, pointing in this direction or that and saying Bhuj.  The trip was only supposed to take seven hours but because of miscommunications, it took four hours longer.  The road was excellent and well marked, but the landscape throughout the whole of Gujarat was much like that of Gir Forest, parched from lack of rain.


It was dark when we arrived at Hotel Oasis. Although it was centrally located, the hotel was disgusting by my standards.  That night I shared my shabby room with peeling paint and at least one cockroach.  Unfortunately, it was too late to change hotels.

Note: One of the sites I really like for picking a hotel is Trip Advisor, but although contributors are suppose to sign they have no connection to the hotel they are recommending, in both Ahmedabad and in Bhuj there were many recommendations by local residences.  This exactly why I read at least ten reviews before making my hotel choices in both cities and even then, I got it wrong the first time in both cities.
Often times when my sleep schedule is upset or the travel has been stressful, I have the physical reaction of a cold or slight respiratory infection, and one had developed by morning.  That next morning, I transferred to the Prince Hotel, rated number one in Bhuj and spent two days resting before I ventured out to again.  The Prince Hotel was rather worn as well, with a bit of peeling paint, yet it was a 100 times nicer than Hotel Oasis.  My room rate included breakfast, but if I had it in my room, I was not only charged a service fee but also for the breakfast.

After two days, I ventured out to the local tourist office and the Museum.  Even with directions by the hotel staff to the auto-rickshaw driver, he still could not find his way.  He finally dropped me near my intended location, and I had to wander among adjacent streets from building to building until I found the tourist office.  Once there, I found two young workers who had the requisite skill of all Indian government employees; they could speak English.  Yet they had no knowledge of the area, no brochures, and no maps.  What they did have were government jobs.
After my Bhuj Tourist Office visit, I wandered back down the street to the local museum.  It was quite interesting with not only the expected historical textile display but also wonderful archeological and local history sections.  Unfortunately, I did not spend as much time as I had wished, as this was school groups day and there were at least 120 elementary through high school kids there who were more fascinated with me than the artifacts they had some distance to see.  Kids are fun, but over 120 all in the same area is a little overwhelming.  There were so many, they were like swarming bees in every section of the museum.  Upon escaping the multitude of youngsters, I hired an auto-rickshaw to return to my hotel and found what I perceived on my way to the tourist office.  Bhuj was one of those typical down-in-the-heel impoverished Indian villages.  But a village that, while maintaining its shabbiness, had expanded because it was surrounded by wonderfully talented artisans whose hand-produced products were found only in this area of India.
Upon my return to the hotel, the desk clerk arranged for me to go on a northern tour the next day with a young guide who took me to textile makers, craft makers, and the Kutch.

This part of Gujarat is called Kutch, a word meaning tortoise in Sanskrit because it is a marshland.  A marshland, which during the monsoon season is covered with rain and the influx of salt water from the Arabian Sea. During the winter dry season, when the water recedes, much of the land is covered with a hard crust of salt, i.e. like a tortoise’s shell, the Kutch.
During the tour, I was taken to see artists in applique and patchwork, and Rogan: a hand painting technique mixing sunflower, linseed or castor oils with vivid colors of various minerals
(interesting the area is covered in fields of Castor plants).   These malleable thickened pastes are stored in earthen pots to be applied on dyed cotton or silk cloths using either a wooden or metallic stylus in geometric or floral motifs. 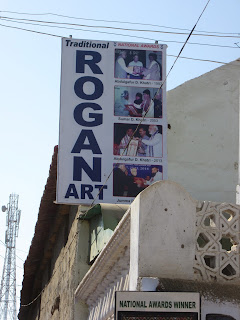 
worker who, using no tools except a little hammer, made a lovely cat wind chime with little bells,

Then we went to the Kutch. 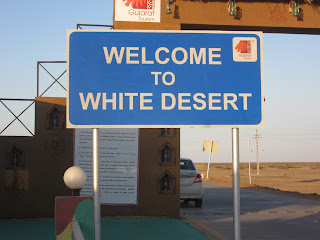 has become Prime Minister of India, the Kutch

has been cleverly developed as a tourist

A temporary tourist tent village is placed on the

hard salt surface during the dry season and


to, in my opinion, gullible travelers who stay there for three to five nights, shopping at the pop-up

kiosks for local goods and going on to the vacant salt flats to experience the sundown.  Throughout

the crowd, impromptu musicians play local instruments’ and drums. It is also advertised that evening

entertainment happens within the tent village, but visitors who are not staying in the complex are

stopped at the gate, so I missed that part of the experience.  Since I was not captivated by the idea of

paying 225 US, for three days/two night at what was called the White Ram Resort experience, I

missed out on the inside village activities of Para Motoring, Bungee Trampoline, ATV rides, pool,

board games and Library.


That evening in the lobby, of my hotel, I met Mr. A.A Wasir, a gracious, elderly gentleman who had what he called The Museum Quality Textiles. The next day upon my visit to Mr. Wasir’s, I was astounded to enter a large room harboring a vast collection of extremely valuable antique Indian textiles, floor to ceiling shelves on either side of the room of beautiful Indian fabrics.  Later, I learned that it was from Mr. Wasir’s collection around which the lovely petit Materials Museum at the HG hotel in Ahmedabad was designed.


The next day, I flew from Bruj to Mumbai (Bombay), a city much different than ‘my old stamping ground Delhi’.  But That’s another story.


PICTURES OF WOMEN AND CHILDREN OF THE KUTCH 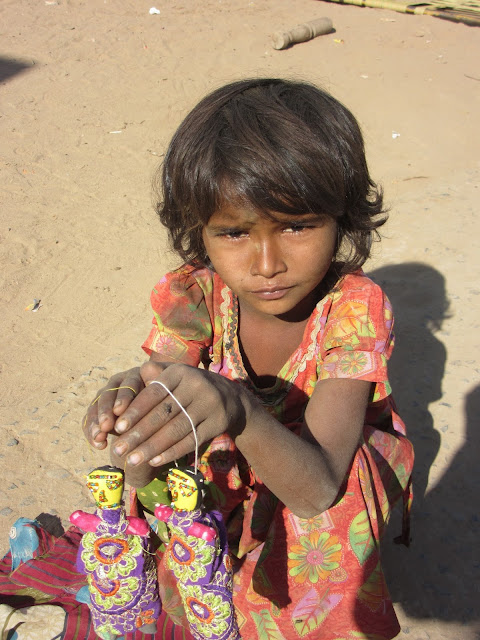 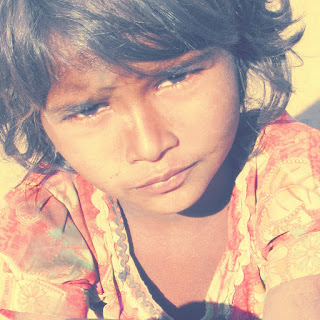 Although school is available to them, most of these children do not attend. After going for a short time, they give it up because they find a school schedule too rigid.  They would rather remain home, play, and show their family goods to any tourists that might arrive. 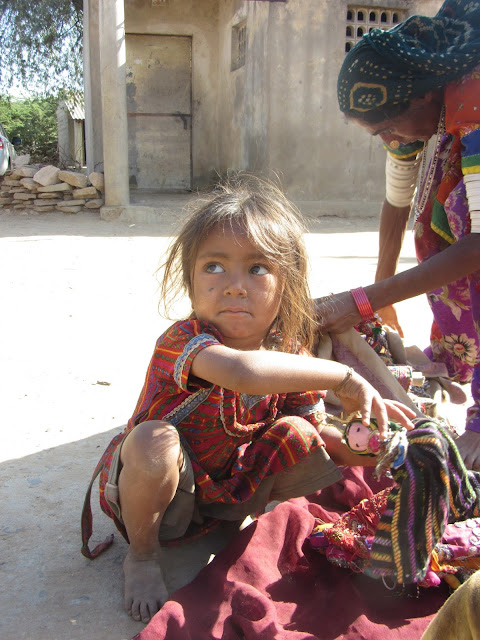 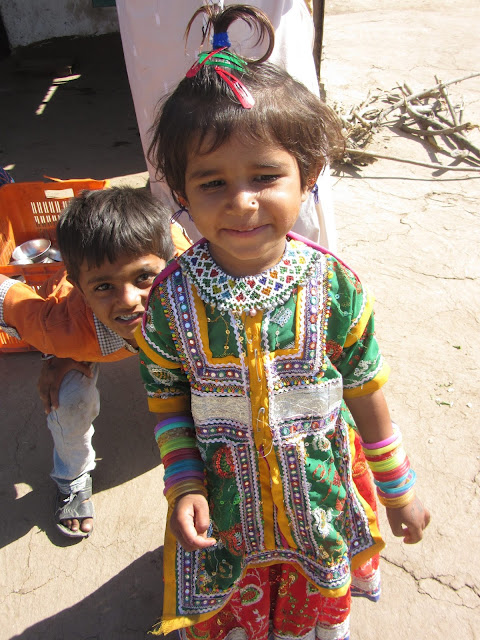 Note the different clothing designs from the different village groups. I was told that although these households are very poor, the women have at least eight different outfits. 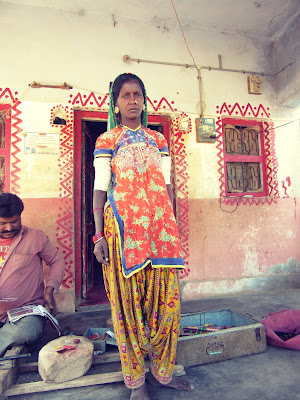 Posted by THE ETERNAL TRAVELER at 3:01 PM