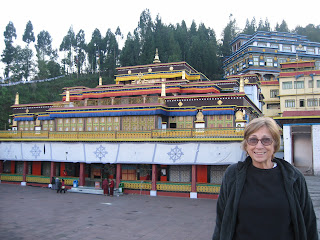 On May 10, I rode 129Km (about a four hour drive) north of Darjeeling to the Indian Protectorate of Sikkim in northeastern India to see the chham (mask) dances at Rumtek Monastery, the capital Gangtok, listed in the book, One Thousand Places to See Before You Die, and to ride a yak at Tsomgo Lake.  Sikkim borders China, is predominately Buddhist and, my young Bhutanese monk friends tell me, it is similar to its neighbor, their homeland, Bhutan.

Although circuitous, the road to the border of Sikkim is much better than the one I traveled from the Indian boarder to Darjeeling.  At the border between India proper and Sikkim, I had to clear immigration just like I would to go into a new country, giving them an extra picture and photocopy of my passport.  Even though I was traveling north, because much of the southern part Sikkim is at a lower altitude than Darjeeling, there are tea plantations, and at lower elevations along the roads are Palm and banyan trees, bougainvillea, hibiscus and many other plants native to south Florida. I learned from the ‘moss man’ (more about him later) that this was called a Mountain Tropical climate.  At one point we stopped on a high cliff to see the convergence of three major rivers, which was quite beautiful.  At the turn off to the monastery the whole road went to hell.  There were areas where the road was just dirt or large sharp stones, and some of the runts in the road were so deep the car actually bucked as we drove over them.

Upon reaching the monastery I found that Sungay Guesthouse, where I had arranged to stay and supposedly right next to the monastery, was actually at the bottom of a very steep hill.  It was inside the monastery gates but I refused to walk up that hill daily.  Being told that another guesthouse was much nearer; we drove up to check it out.   As I walked out of the second one, called Sangay, a veritable hellhole, (probably why it cost only 150 rupees – about $3.00 a night), a man leaned into the car window and said, “there’s a guesthouse right at the monastery.”  I thanked him and up we drove.
Eureka!  A habitable room, well not quite, I mean I really could not put my bare feet on the floor; there was no hot water shower, only a hot water faucet and a large and small bucket set.  A dirty gauze dust laden cover was over quilt and a very large, very fast spider in the corner of the ceiling, but it would do. The sheets were clean; one side of the gauze quilt cover was torn, so I took the liberty of helping along the damage and removed a very clean quilt from its dirty cover.  I carry flip-flops with me just in case of emergencies like these and they solved the floor problem.  The cost was 300 rupees, about six US dollars a night.  Conveniently, there was also a restaurant used by both the monks and the locals (see the pictures), albeit most of my friends wouldn’t eat in because of sanitation concerns, but I could walk across a cement parking area and I was in the monastery.  I took it for three nights. ---- Twice, I found other little creatures trundling across my sheets but I removed them carefully before I got into bed, so as not to hurt another living being.  After all, they were not what I consider in the insect/bug universe my worse enemies, cockroaches and mosquitoes, which I kill on sight.   Any one who has been so bad in their previous life that they are reincarnated into a cockroach or mosquito needs a second chance and I always give it to them when I can. 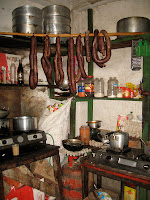 That evening when I went down to order dinner in the kitchen, hanging over the stove were strings of disgusting looking greasy, wine colored sausages.  It was then and there that I decided I would be absolutely full vegan (not entirely - I did eat egg the next morning for breakfast).  While I waited for my dinner in the dinning room, six young monks ask me to join their table.  These young men ranged in age from 15 to 19 and were here from Bhutan to study in the academic school or Institute.  They told me there was no religious/academic education at this level in Bhutan and that they were to study at Rumtek for eleven years.  The fee paid by each of their families was 1500 rupees ($35) for the full eleven years. After finishing their studies, they each planned to go back to a monastery in Bhutan and become teachers.  They wanted to know where I had been so I showed them pictures of the places on my computer.  Interestingly, although they had all seen television, they had never hear of the Great Barrier Reef, and were surprised at the pictures of coral and to learn they were living beings.
Chham Dances
On the eleventh the monks began with their daily puja at 3:00 am, ending at 6:30, so when I awoke at six I could hear the drums and horns of the prayers.  It was really the chham dance dress rehearsal day on the 12Th
After the dances, the young Bhutanese monks took me to the Golden Stupa. Inside a glass-enclosed room, which is always locked is the large stupa. The monks prevailed upon the grossly fat old monk (lama?) who sat in the corner reading his mantras to let us in.  He not only opened the room but also locked the outer door to the stupa entry room so we were the only visitors.  On the walls around the center stupa are bust effigies of all the sixteen former Karmpas of this monastery, the bust of he current 17th Kamala, a Buddha bust statue, and two other scary effigies that were a mystery to me.  Inside the center stupa laid the body of the 16th Karmapa. 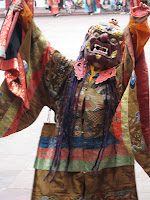