FIRST OF TWO WEEKS IN ENGLAND

FIRST OF TWO WEEKS in ENGLAND

One of the great advantages of travel is that I meet such interesting people. Many of whom have become long, lasting friends.
That is how I came to visit the Cumbria moors of Northern England.  Carol Darce, one of the most fascinating people I have met, at age 17 began riding her bicycle across such countries as Iran, Afghanistan, much of India, Nepal and places beyond. She, still with her bicycles, has now migrated from her London flat to Nenthead, the highest village in England.  Amid the sweeping vistas and extremely harsh winters, she is resurrecting a four-acre property making the large shambles of a house into a magnificent home with incredible views of the moors. Typical of her can do personality; Carol has done much of the labor herself, building a coir pond in her back yard and as I left, she began refinishing the wooden kitchen floors.  With an impressive collection of artifacts from her many travels and the lovely conservatory she had rebuilt by a local master builder, Carol has created an exciting three bedroom, two-bath home with views to die for. 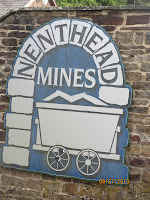 Nenthead and its nearest village, Alston, was historically England;s leading lead mining village.  But the mines closed in 1961, which affected the economy of the 2000 Nenthead villagers, and that of the
whole area. The Heritage Museum about the history of lead and the mining process has also closed and is now a relic of a past era.
During out brief visit to the Lake District, although the lakes are beautiful and interesting, I found it much like the Cotswolds, overcrowded with masses of traffic.  PBS’s Agatha Christie Mysteries series gave me the impression that Windermere was a beautiful lake with quietly elegant resorts where patrons arrived by boat and settled in for a fortnight. NOT!  The Windermere I saw was a veritable tourist trap full of masses of tourist with their children, almost all eating large ice creams.  Talk about being disappointed, obviously the ‘Mystery’ producers have used a different location to depict Windermere in their stories.
At Ullswater, another lake and village noted for its water activities, although lower on the ‘tourist attack scale,’ we again found parking impossible.  Grasmere, the last village we visited, was more like the Lake District I had envisioned, with its charming stone village houses, some converted into quaint restaurants, and control passes to the lake. Grasmere is also the location of Wordsworth’s Dove Cottage preserved by the local community.
The next afternoon we visited the delightful village of Hexham, spending our time l taking each other’s pictures in the ‘stocks,’ and venues of this beautiful little historic market town.
Then it was off to Hadrian’s Wall. Although the wall has a quite different design and scope than the Great Wall of China, it is just as impressive.  For one, the size and weight of slaps of rock which had to be moved from somewhere else, and two, how they were able to pile these rock-slaps up evenly atop each other to create the wall had to be an incredible feat. The Romans called the area, Vindolanda.  Today there are two museums near the wall, one, the largest Roman fort ever excavated in England, and the other, a site museum full of artifacts of the people and the period.
One of the fall traditions for residences in the area is to put out witches in their yards - see some above and below:


On my last day, we took a long hillside walk among the peat bogs and the moors. Sheep were everywhere. 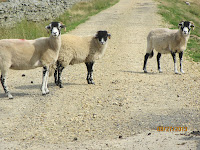 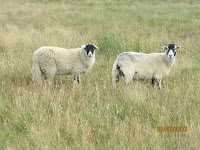 That evening we had dinner at the Nent Hall, where I ate the most delicious courgette or Zucchini (as we Americans call it) soup I have ever eaten anywhere in the world.  A very good restaurant indeed.
During dinner, much to my annoyance, the four men who sat at the table next to ours insisted on watching TV.  It was then we heard some amazing news.  The lead mines were reopening and this depressed area would again have jobs. By the men’s conversations, we ascertained they were part of the project.  Their interest rallied around the locals’ concern about the risk to the environment. This is a community in-which most of the inhabitants have either moved away or been living on the dole since the 60s. Thus these managers decided environmental concerns would be the least of their   problems because the community desperately needed jobs.  Currently the area had been given over to massive numbers of cyclists, hikers on the Pennine Way and a few retirees who had bought houses and renovated them, much like Carol was doing, into homes with modern conveniences.  How the other retirees feel about the reopening of the mining industry, I have no idea, but my friend Carol, even as an environmentalist is keen on the idea.
The next morning I was off to Hawes in the Yorkshire Dales.

Posted by THE ETERNAL TRAVELER at 2:20 AM