HAWES, A VILLAGE IN THE YORKSHIRE DALES

HAWES, A VILLAGE IN THE YORKSHIRE DALES 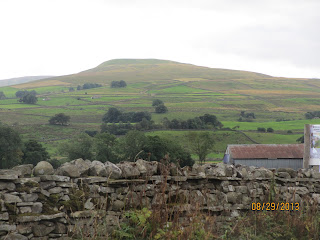 Driving through the Yorkshire Dales of England is a landscape artist’s dream. The Picturesque narrow country roads bordered by low stonewalls and hedgerows, that separate sheep pastures, are the norm in northern England.  The market town of Hawes is in the heart of the whole Dales area.  Here, I had a delightful two-night stay at the Fairview, which has received a local award for  the best breakfast among guesthouses in the area.  And yum, it is excellent.  Because of the Fairview’s   great location, once I parked my car, I had no need to use it during my whole visit.
My first stop was to drop off my laundry. Then I was off to the Wensleydale Cheese Factory.  Wallace’s, (of Wallace and Grommet) favorite cheese.  Not only do they have a great movie explaining the history of the cheese but there is also a humorous young man who goes through the process of cheese making for all to see.  Then there is more cheese making demonstrations and a tour of the actual factory.  After I explored the whole cheese making operation, I headed off to the gift shop, and the large, very long tasting room, where I tasted every flavor of Wensleydale made, and there are a rows and rows of flavors.  I made a pit stop in one of their dining rooms for a light lunch and then was off to peruse the local shops on my way to the local Visitors Center in hopes of going on the Red Squirrel 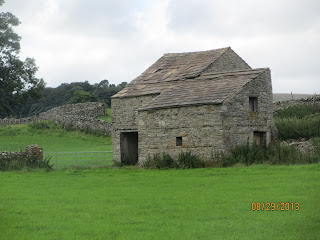 walk, but I was too late.

But the center offered me another walk on the Pennine Way to the Green Dragon Inn to see its waterfall.  The walk took me through sheep pastures, passed picturesque buildings and mildly hilly terrain to the ancient village of Hardraw.  On the way I saw a fence sign, Sheep Dog Trials, 6 PM.  Well, I surely wasn’t going to miss that.

The Green Dragon Inn dates back to the 13th/14th century and the interior around the two fireplaces has the putrid smell of years of  accumulated soot.  How anyone could sit in those rooms was beyond me, and I rushed through quickly to the outer bar. Although historians aren’t quite sure, it is believed that the name of the Inn comes from olden times of age old conflicts when the lord of the manor in these parts would send out a call for his men to meet under the banner of the Green Dragon at the falls.

The falls are privately owned by the Inn, which charges four pounds to take a look.  I’m sure that during the summer months they take in a bundle just from the visitors to the falls.  There, I met a charming couple from Dublin who were traveling with their adopted sheep dog, on a more extended visit to the Dales than mine.  They explained that the Irish government had a program of giving pensioners (retirees) a holiday fund so they could take a vacation at least once year. This fund of course is really a medicinal concept that cuts down on sedentary illnesses and freshens pensioners’ outlooks as they age. I liked that idea a great deal, not just for me the avid traveler, but for all the older folks who worked hard all their lives and in retirement can only afford to sit around and wait to die (or now are forced in their old age to push grocery carts at stores for patrons to make ends meet).  In my opinion it is a much better use of our tax dollars than spending the money on the military/industrial community to create explosives to unsettle other peoples’ lives.

Upon arriving back from the waterfall and the Green Dragon Inn I found there was no time to waste. I had to immediately turn around and go back the way I had just come to see the Sheep Dog Trials.  There were five dogs ranging in age from one year to eleven years old.  They were all very friendly and I had a chance to say hello to each before their work began.  The flock of sheep, who stood together on the far side of the field, stay outside during the whole winter and their coats were becoming thick and woolly again after their spring shearing.   The farmer directed the dogs with some voice directions but mostly by sounds made from his whistle.  The dogs, which generally worked in twos, were extremely eager.  It was obvious they loved making the sheep do their bidding.  They began by circling the flock, one on each side, giving the sheep a wide berth. Yet the dogs were able to direct the whole flock into a pen, while separating six from the larger flock to use to show off their skills.  Each dog was given an opportunity to go through their paces as a sheepherder and they were all wonderful to watch.  Lucy the youngest was a natural, probably the most skilled of all the five dogs considering she was just shy of a year old.

After this wonderful exhibition of sheepdog skill, off I went for a pub dinner of homemade sweet potato soup and oven fresh bread. The next morning, I was off to the Peaks District, one of my very favorite areas in all of England.
Posted by THE ETERNAL TRAVELER at 9:47 PM