The cars and motorcycles still play ‘chicken’ on the roadways with the bicycles, rickshaws, pedestrians, porters, and each other. As always, Kathmandu has scores of porters moving everything from davenports, small refrigerators, carpets, to all asundry goods here and there through out the valley.  Some things about the city never change.

I have just spent 25 days in Kathmandu. The earthquake has caused major damage to four out of five of the main Kathmandu Valley tourist attractions: Durbar Squares in Kathmandu, Patan, Bhaktapur and the Monkey Temple.  However the government has reopened all of the Squares as well as the beautiful Boudhanath Stupa.

Many temples and Naweri buildings at the Bhaktapur, The World Heritage site, are in excellent condition.  The other ‘Valley’ Durbar squares also have antique buildings, and temples still standing, beautiful and just waiting for your visit.  Both the Patan and Bhaktapur Museums are also open, lovely as ever.  In Patan there is a new attraction, the former royals’ local palace next to the Patan museum, although devoid of furniture, it can also be visited as part of the general museum admission.  During all my visits to Patan, this was the first time I found this palace open. It is an addition to the splendid little Patan Museum, available for public viewing, and I was delighted.  Shopkeepers are open for business as well, waiting for you to come.


Patan is considered the workshop of Kathmandu Valley and parts of Northern India. Over the years, many artisans fled Tibet and settled in here, restarting their little workshops. Some can be found behind shops, where these creative individuals are plying their artistic trades.  Look in the nooks and crannies of this beautiful town and you might just find that magical piece you didn’t know you were seeking.

For the adventurous shopper, as well as the collector, Patan can be a gold mine if you are patient. There is also an authentic little Newari Inn where one can stay and enjoy, while you are ‘shopping ‘til you drop.’


As for the Nepali Himalayas, all the major treks are available.  I met one couple that had just returned from the Annapurna Circle trek and found it safe and beautiful as ever.  The trek to Numch Bazaar  (last village before the Everest Base camp – it has a museum, temples and paths to other interesting villages - some where Sir Edmund Hillary would ‘hang’ out) is also opened and available.

It was after I sent my trekking shoes back home with my friend, Jane, that I discovered Mustang was not only safe but also very much opened for business.  I was told many of the shops are closed, but the Mustang area has been a trekking goal of mine for many years.  Shopping for me in this area of Nepal has little appeal, rather interacting with the local people and enjoying the natural beauty of this mystical place is more to my taste.  This season would have been less crowded, more peaceful.  There are almost no tourists, and although it is the rainy season, the weather would be warmer than other times during the year.

My first visit to Numch Bazaar was during the month of July.  As the guide and I trekked higher, the air became thinner, and the Himalayan weather, colder and colder by the time we reached our guesthouse; I was chilled to the bone.  I don’t do well in cold weather, so the monsoon season i.e. now is the best time for my Nepali trekking. I am so sorry I missed this opportunity, but who knows maybe another time. 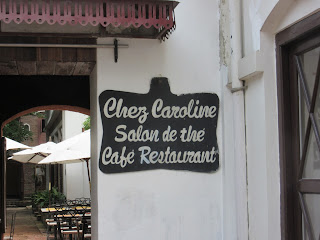 An excellent but rather pricey restaurant in Baber Mahal


Shops and restaurants are open in all the Kathmandu tourists’ haunts and their owners are eager for tourists.  Much of the jewelry made in Patan can also be purchased in Kathmandu. The Himalayas have an abundance of semiprecious stones, many you may never have heard of (If you’re a jewelry buff you might want to bone up on crystals and stones of Asia before you go). Gold is also at times a good buy in Kathmandu (check the current international and Kathmandu price before you head out to New Road on a gold shopping spree).  The Natraj Jewellers on New Road is a wonderful, small but tidy little shop to begin your quest.

What ever you purchase, please bargain before you buy (except gold).  It’s expected.  The bargaining rule of thumb is ‘buy at a price lower than what was originally ask, but be sure when you walk away with the ‘goods’ both the buyer and seller are happy.


Not only did I enjoy the historic sites throughout Kathmandu Valley, I spent time with friends, who took me to great restaurants, some of which, I never knew existed.

Near the end of Thamel near New Road is the Garden of Dreams.  This is a lovely respite from all the pollution, noise and traffic.  After paying a small fee, one can enter, enjoy the gardens, get a mat to lay on the grass and read, and after, have a delicious lunch or dinner a the Kiser Café.  All of which, I highly recommend. 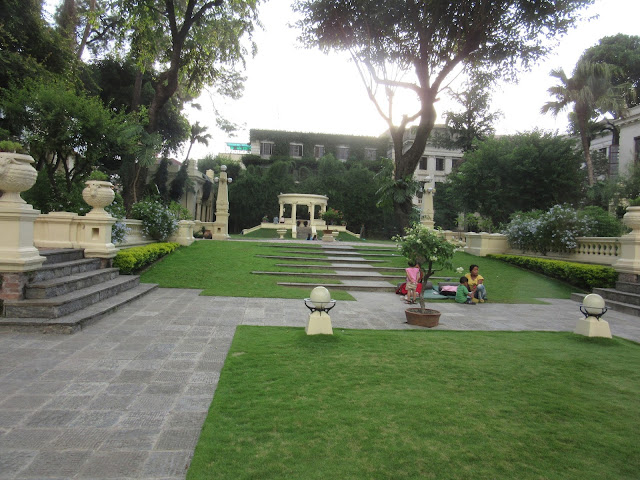 Truly A GARDEN OF DREAMS located in the middle of Kathmandu.

Once out of the library, cross the street and walk along the high green fence to the entry of the royal palace of past, and the recently deposed king, which is now opened to the public. Although no cameras or cellphones are allowed, it is a very interesting experience culminating in the ruined area at the back of the palace where in 2001; most of that current royal family was assassinated.

Maya, Ine, Ranku, Anju and I visited the very interesting royal palace in Kathmandu for the first time (one may not take photos inside).

Nepal had been a ‘kingdom’ for hundreds of years, then in 2001 the story told by one of the cooks and a military guard is that two persons, each wearing a facemask depicting the eldest son, assassinated the whole royal family, the crown prince included.   The official story is that the prince murdered his family at dinner then turned the gun on himself.  But in seeing the layout of the ruins of the former buildings, the visitor can see that the family was not dining at the time, but were gunned down in nearby rooms through out the area.  The crown prince, who it was said had earlier smoked some ‘pot’ and had a bit to drink, had supposedly gone to bed early.  Although he was accused of the killing his family, he was found with six bullet holes in his back and one in his head.

The King’s brother was in Pakora at the time, but his wife and son were also present.  She received a bullet wound but survived and her son received minor injuries. The cook and the military guard, both of whom told the same story of the masked gunmen. After each suffered unfortunate fates; the cook died, and the military guard was put in jail for life for what some considered trumped up murder charges. The CIA, the Indian government, and the King's brother have all been accused of the murders, but the case of the Nepali royal family’s murder has never been solved.


Eventually the brother became King Gyanendta and his son next in line for the throne.
During his reign, Gyanendra, the new king became extremely dictatorial (r. 2001-2008).  He even dissolved the parliament.  During the same time (2003-2006), there was a Maoists insurection in the country. Eventually the Maoist party’s leader became Prime Minister for a short period.  It was at this point; the Maoists insisted that the monarchy be dissolved.

The Legislative body agreed and Nepal is now no longer a monarchy.  Even though Nepal had a legislature for years and was ruled as a constitutional monarchy, the country had no written constitution.  I have been coming to Nepal since 2007 and now in 2015 the government finally has a written constitutional framework that was presented to the public for discussion.  They even had a holiday set aside so people would be free to meet, discuss, and consider the new constitutional draft.  My friend, Ine and I believe it will take a few more years to just to get the finished constitution voted on and ratified.

If during a visit to Nepal, you need some medical help, there are excellent medical services in Kathmandu.  Your hotel will be able to guide you.  Although I have been fortunate enough to not have had to use them, I understand the main hospital ever has suites.  Although expensive, they will work with your travel insurance to take care of the costs.  If you don't need major hospitalisation but do need medical assistance, the CIWEC CLINIC, hospital travel medicine center is a very good choice. For directions, their phone numbers are 4424111, 4435232 or 4413163.

There is always Krishna, my favorite, who although he has contracts with Italian companies, always has time to make wonderful clothing items for me. This year he made 15 pieces, everyting from linen blouses, a little black dress, and silk evening slacks.

BEAUTY FOR LESS AT: MIGLIORE

Oh, and if you need to get your hair colored or any other beauty care, go to  Migliore, phone number 4650183 - address Maharajgunj, Chakrapath, if you wish to make a reservation. The five of us just walked in.  It costs five US dollars for a hair color( that includes the wash and blow-dry. It costs  8 US for a pedicure and manicure. Add a two dollar tip; you've spent15 US dollars, and you'll look 'so
fine'before your return home.

If you need to mail anything, your best best is to go to Pilgrims Book House onJP Thamel road (on the 'main drag' in Thamel, the backpackers/tourist area.  Just take you 'stuff' in and the pack and ship for a fee.  I understand they are much more reliable than the local post office.  I have used them many times over the years and every item has arrived at my home in a timely manner.  Currently things are only being 'airmailed' out of Nepal because of the 'quakes, of course.

I did miss out on what would have been a great trek, but I had a wonderful holiday and SO CAN YOU.  If you even had a hankering to go to Nepal, GO! Now is a grand time as any, and beautiful Nepal, whose only industry is tourism desperately needs your help.  What better way to have a great vacation! 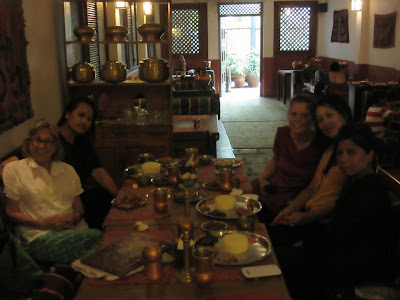 Typical Nepali restaurant - the whole gang is here.  Ine chose Nepali
food, as it was her last day with us.

My close friends are very fortunate. However, there are many people who are very poor, still living in tents (as I showed you in earlier posts), on the streets, barely making a living.  But everyone works hard. And it's our job to either take a holiday and spend a little, or donate to improve the living conditions of those who may not have housing after the earthquake. Read my pervious posts with suggestions, 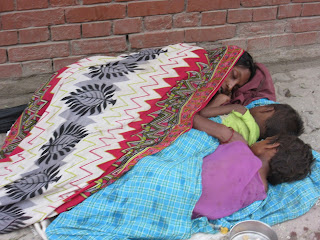 A mother with her two children sleeping on the street.

or please contact me for information of where you can help with your after earthquake donations.

If you have any Nepal earthquake experiences you would like to share, please email them to me. Thank you.

Posted by THE ETERNAL TRAVELER at 1:27 PM