A VISIT TO BERLIN

WOW!  Berlin is sensational.  My last visit to this lovely city was in 1998.  During this current visit, I stayed with friends, Toby, Lizzy and their little daughter, who live in what was part of the former East Berlin.  The location is perfect; about four blocks from the WALL MUSEUM, and in the opposite direction, about four blocks from MUSEUM ISLAND.

And yes, theNefertiti bust at the NEUES MUSEUM is just as beautiful as all the photos I had seen.  What a beautiful bust. What a beautiful woman.  The whole of the Egyptian section of this museum is a wonderful experience.  It is quite different, yet complimentary to what one sees in London’s BRITISH MUSEUM.  If one is an Egyptologist, it behooves you to see both these splendid collections.

‘The unique GOLDEN HAT’ is also of great interest. From the Bronze Age, only three hats have been found, two in southern Germany and one in France.  It is reputed to be from about 419 AD. Part of a SUN CULT, the tall conical hat made of 490 g of gold was believed to be used by priests in ‘astrological/calendarical functions’ (Wikipedia phrase).

All in all the museums on the island and the outside sculptures are a delight. 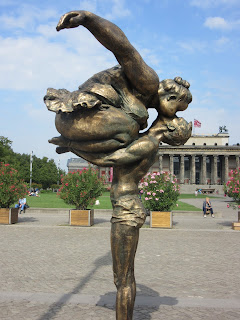 Another remarkably interesting Berlin Venue is the Berlin Synagogue, the largest in Germany.  Originally finished in 1867, it seated 3200 people, the men down stairs and the women up.  During the 1942, Battle for Berlin, the Synagogue was heavily damaged, and now although it is a museum, the sanctuary no longer exists.


London continues to be my favorite city because of the culture and because it is so walk able. However, I have discovered Berlin has less traffic and is much more laid back than London, which makes Berlin an equally enjoyable venue. Every part, including shopping, is highly accessible without having to deal the traffic or the pollution one finds in London. Berlin is also a great ‘eating town.’  In my opinion, Berlin is a city that should be on every European traveler’s itinerary.  You won’t be disappointed.

NEXT:  BACK IN THE STATES – A TRIP NORTH

Posted by THE ETERNAL TRAVELER at 8:59 AM