England in August is becoming a habit.  One I enjoy immensely: seeing a friend in Essex, friends in the Peak district, and visiting London.

My friend Carol, after deciding that her beautiful house in a lonely area of Cumbria was too desolate for her lifestyle, bough a semi-detached in West Cliff by the Sea, and I was invited to inspect.   It was still under renovation when I visited but house layout and location is just lovely.  It will have museum quality charm when Carol is done.

Besides being a great piece of property, the house is located just an hour by train from London, so it is convenient to all the wonderful cultural activities that Carol enjoys.

Next I was off again to one of my favorite haunts, the Peak District and my good friends Mark and Sarah.  They have a charming little semi-attached home in Beeston a suburb of Nottingham.

Every time I visit, they take me on delightful adventures (see past blog entries) and this year it was again an enjoyable afternoon with lunch at a country pub then a charming walk through Sherwood Forest.  On my last night there, Matthew, Sarah’s son, Sarah, Mark and I walked over to this amazing local, The Victoria Hotel Pub that has a wonderful drinks cellar and serves outstanding dinners in a traditionally beautiful English Pub setting.

After three brilliant days I was off to London, my favorite city.  Hotels have become prohibitively expensive.  The alternatives are hostels.  I’m a little too old to bunk in with six or 12 others in a room. However I have found the perfect alternative: university rooms.com.  Vacant university dorm rooms are great housing for the international visitor.  You retort, ‘Ugh!  I remember the old days.  Shabby accommodations with baths down the hall.’  Not so today.  There are all kinds of prices through out the city university system of rooms, ranging from around $65 US a night (a really cheap sleep in London – though some still do have the shared bath) to as high as two or three hundred for a two bedroom suit just off Kensington Gardens (a prime location).

I opt for Princes Gate, part of the Imperial College on Exhibition Road.  This year for  $99 US a night, I got a private room and bath, WIFI for my whole stay for 5 pounds, free full breakfast every morning, and daily use of their gym, health center and pool.  Princes Gate rooms are clean and modern with a very helpful staff, daily room service, and a great location.  Just down from Albert Hall, two blocks to Kensington Gardens, a few feet from the V&A, and across the street from the Museum of Natural History, the Science Museum, lots of little restaurants in the area, and the South Kensington Tube Street (other than the fact that there is no lift - thinking of luggage - at the SKTS station), the location is perfect.
This year the summer was about ‘shoes’.  There were shoes exhibits at the Design Museum, the Materials Museum and the definitive Shoe Exhibit was at the V&A.  Wow!
I learned more about shoes than I ever knew I wanted to know and it was all fascinating.


The Design Museum is a must see for me every year.  The last few summers my timing has been superb, in that I have seen their display of the year’s new inventions including the ones that received that year's awards.  Besides the inventions, the Camper Shoe Company, which I had never heard of, located in Majorca and mainland Spain, had an interesting presentation of the history of their company and their shoes. 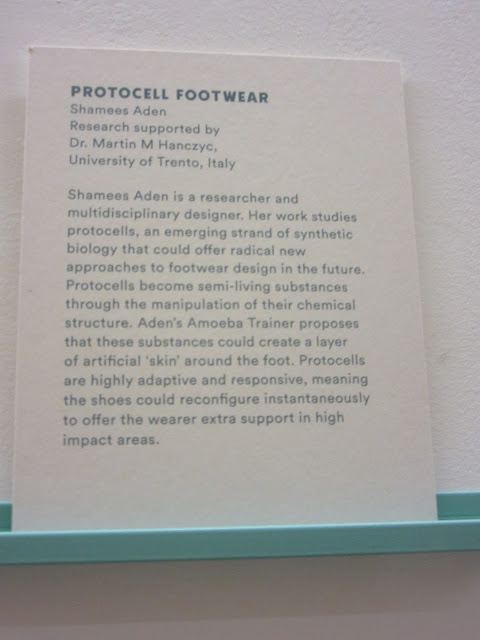 As for the Materials Museum, I was highly disappointed, and I probably won’t waste my time again.

I also hit the jackpot with London theatre tickets this year.  Have you ever heard of the a British musical group of the 6os, The KINKS?  There is now a West End musical play about their rise in the music world.  I had never heard of them but I bought a matinee ticket and had a great afternoon.  The show was mediocre, but the enthusiastic crowd made up the fun.  It was an almost all-British audience and they got right down into the music.  They clapped to the tunes, stood dancing at their seats and cheered when an extremely famous song from their youth was preformed.  All in all it was lots of fun.  Of course I was not surprised by the enthusiasm among the West End theatre crowd, which is often standard behavior among British audiences and I love it.

But I really hit the Jackpot when I went to the box office of the Theatre where ‘The Book of Mormons; was playing and found a reasonably priced seat available in the stalls on my last night in London.  I swept it up and to my joy when I arrived found it was a great seat.  Audiences either love or hate this musical, after all, it was written by the ‘South Park Boys’, so it is rude.  But it is also fun, and if one has a liberal sense of humor, you will absolutely love the play.  I enjoyed it so much I will see it again if I can get a ticket during my next visit to London.
NOTE:  Instead of purchasing theatre tickets at the half-price sale booths in Leicester Square, go directly to the theatre where the play is showing.  If they have any last minute tickets available, you will have a better selection and they will cost less. Just saying!
................................................................
This is the first time Buckingham Palace was opened during one of my London visits, so I went on line and got a ticket.  I was guided through various rooms observing the Queen’s massive art collection, the room where she greets guests, the throne room, and the most interesting, the dinning room, where the table was set for a state dinner.  Of course, the Queen spends the month of August at Balmorall Castle in Scotland. Therefore, the table setting was just a mock-up for the tourists.  No picture-taking is allowed in the palace, so the interior pictures I have are from post cards. Non-the-less it does give readers some idea of the palace interior. 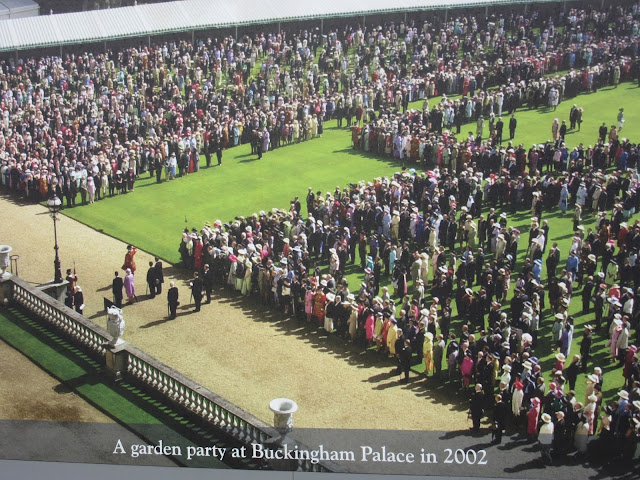 Thinking there was a show about the history of Liberty fabrics, I went to the Liberty Fabric store, which is located in a beautiful Tudor Building.  Unfortunately, I was a week early. Also, I discovered that the company must have sold out, and now has very few fabrics.  Rather, the store is full of lots of cosmetics as well as high priced knick-knacks and stationary products.  It does have a great hand made carpet department on the top floor, but these rugs are also outrageously expensive.
I also made my annual stop at Harrods toy department, which has shrunk a bit it but still has great bears.  I bought a Kitty for my grandson, which was a hit during my visit for his birthday. (Sorry I didn't take a photo of the stuffed Kitty.)

NEXT: Sarah and Mark join me for a London Bank weekend.

Posted by THE ETERNAL TRAVELER at 4:35 PM