THE GOLDEN TEMPLE AND LOWERING THE FLAGS

AMRITSAR and THE GOLDEN TEMPLE

After being in the cooling breezes of Srinagar, Amritsar was a shock.  We were there for only three days but unfortunately not only was it suffocatingly hot it was crowded with weekenders.  People came into the city in droves, on buses, packed in large open-air trucks and private cars.  Summer weekends in Amritsar had become come another religious vacation spot.  The attractions are the Golden Temple, and the daily unison lowering of each country’s flag at the India/Pakistan border. 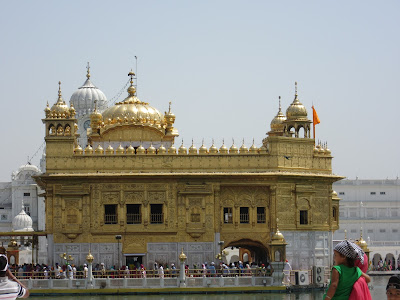 The Golden Temple is the magnificent center of world Sikhism.  But for holiday weekenders, it has two other attractions; visitors can sleep on the vast tiled entrance area, so no need for a hotel, and the temple kitchens feed all visitors free. There is a luggage and shoe storage areas if a visitor wishes to go inside the temple interior to listen to the musicians or visit the inner room of the actual Golden Temple, which is surrounded by water and is entered by a long covered walkway. This intersantcum contains the holy book being read by a holy man and also the temple musicians who play traditional interments and sing religious songs. Thus a weekend holiday, other than very basic transportation is to totally free.

Sikh volunteers supply all the meals and cooking.  Thousands of meals are produced twenty-four hours a day.  Metal plates and cups are washed by these volunteers twice, first with soap and water than with sand in outside meal areas.   While in the main kitchen the temple has converted to more modern methods.  Often a Sikh greeter stands outside the dinning room door and welcomes guests to come in and sit on the matted floors and be served their meals. Because of the size of the crowds and the length of the lines to see the sacred book, it was impossible to get inside, so we were content to enjoy the interior walkways and the Golden Temple exterior.


Sikhs are a kind and generous group of people with great fortitude, yet their museum (one of the most gruesome I have ever encountered) shows of Sikhs being tortured in ways beyond belief in the name of their religion.  However, during Indira Gandhi’s Prime Minister-ship, she ruled the country with an ‘iron hand.’  Finally in the early 1980s a number of Indian states made bids for more freedoms from Gandhi’s central government. The situation became so explosive in Punjab State; Sikh separatists raised the question of the Punjab becoming autonomous from the central Indian government. By 1984, the separatist had fortified the Golden temple and Indira Gandhi, in a ruthless move had the Indian Army attack.  Although the sacred books were saved, much of the temple was damaged and more than 450 Sikhs died. After the attack many Sikhs in the Indian Army resigned their posts and five months later Indira Gandhi was assassinated by her Sikh guards.
The other exiting event in the Amritsar area is to be one of the (I am told) twenty thousand observers attend the simultaneous lowering of their national flags every evening at 6:30 PM at the border between India and Pakistan.  With pomp and circumstance this ritual is in-acted every day to the delight of both country’s citizens.  Where as the Pakistani women are more sedate and stay in there seats until the final lowering the two flags, Indian girls, who live with much more freedom than their Pakistani counterparts, dance to wonderfully entertaining music entertaining themselves an the crowd until it is time for the aggressive yet tongue-in-cheek ceremony to begins.  I hope the pictures give you and idea of the event.  For two countries that can’t get along, this is a far cry from the negative behaviors that are the constant politically experiences between India and Pakistan.

Posted by THE ETERNAL TRAVELER at 4:39 AM