I am in a state of shock!  Leh’s main streets are laid out in a  square, and three out of four of these streets are being dug up to modernise the drainage system.  Two streets are totally blocked off while a third still has traffic, but shop  owners on this street have had to tear down their buildings so the drains can be fixed, and the road widened at the same time.

The first thing that popped in my mind when I saw Leh’s decimated streets was Connaught Place in Delhi, where the roads on the inside Circles have been in a muddy state of disrepair for the last ten years; a corrupt snafu of Congress Party cronies???  I don’t know.  But something is definitely wrong. Was that going to happen here in Leh too? But hurray!  Not in Leh. Everyday, work is underway.

Although the Indian army directs and coordinates the road projects in the Himalayans, of which there are a great deal, with landslides and constant repairs, most of the workers are from Bihar, Indian’s poorest state, recruited to do the actual manual labor. Out in the hot sun using an old cement mixer, the work appears to me to be back braking.  But it goes on, and progress is being made daily.

Two must sees in the center of Leh are The Jokhang complex, a Tibetan temple, which “was  consecrated by the Dalai Lama” in 1980, and the “green domed (Sunni) Jami Masjid (mosque)” built in the 17th century in recognition of military support given to the King of Ladakh by the Moghul ruler Aurangzeb.

The other day, Mr. Modi, India’s new Prime Minister came to Leh to announce the building of a new hydroelectric plant for the area.  This would be a great boon for the Ladakh, as currently electricity is erratic and intermittent. Mr. Modi, a member of the BJP political party, which has in the past been a predominately Hindu party, trounced the governing Congress Party (led by the Gandhi family), in the latest national elections, which had been in power for many years.  Mr. Modi also went to Kargil, the other Ladakhi district. But he stayed out of the Jammu Kashmir sections of this state. There, there is an extreme distrust of Modi by most Muslims because of past events in Modi’s own home state of Gujarat, and also because Modi is still a member of the RSS a extremely militant wing of the BJP Party (Mr. Modi has distanced himself from this group in the last few years, which for him could become a two edged sword).  But I am not here to give a history lesson in Indian politics.  If you are interested, look up Modi’s background and the latest election - you might find it fascinating reading. 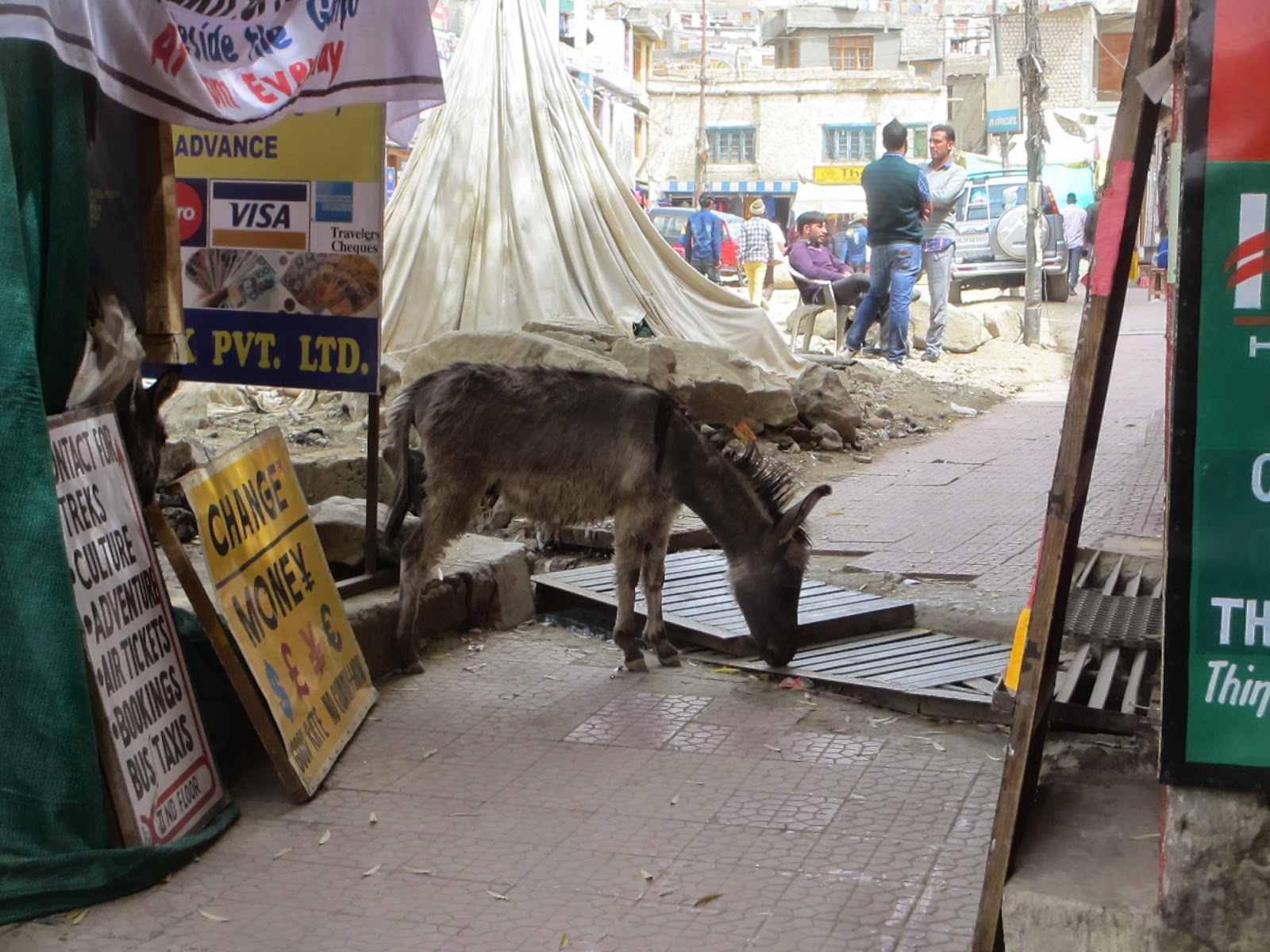 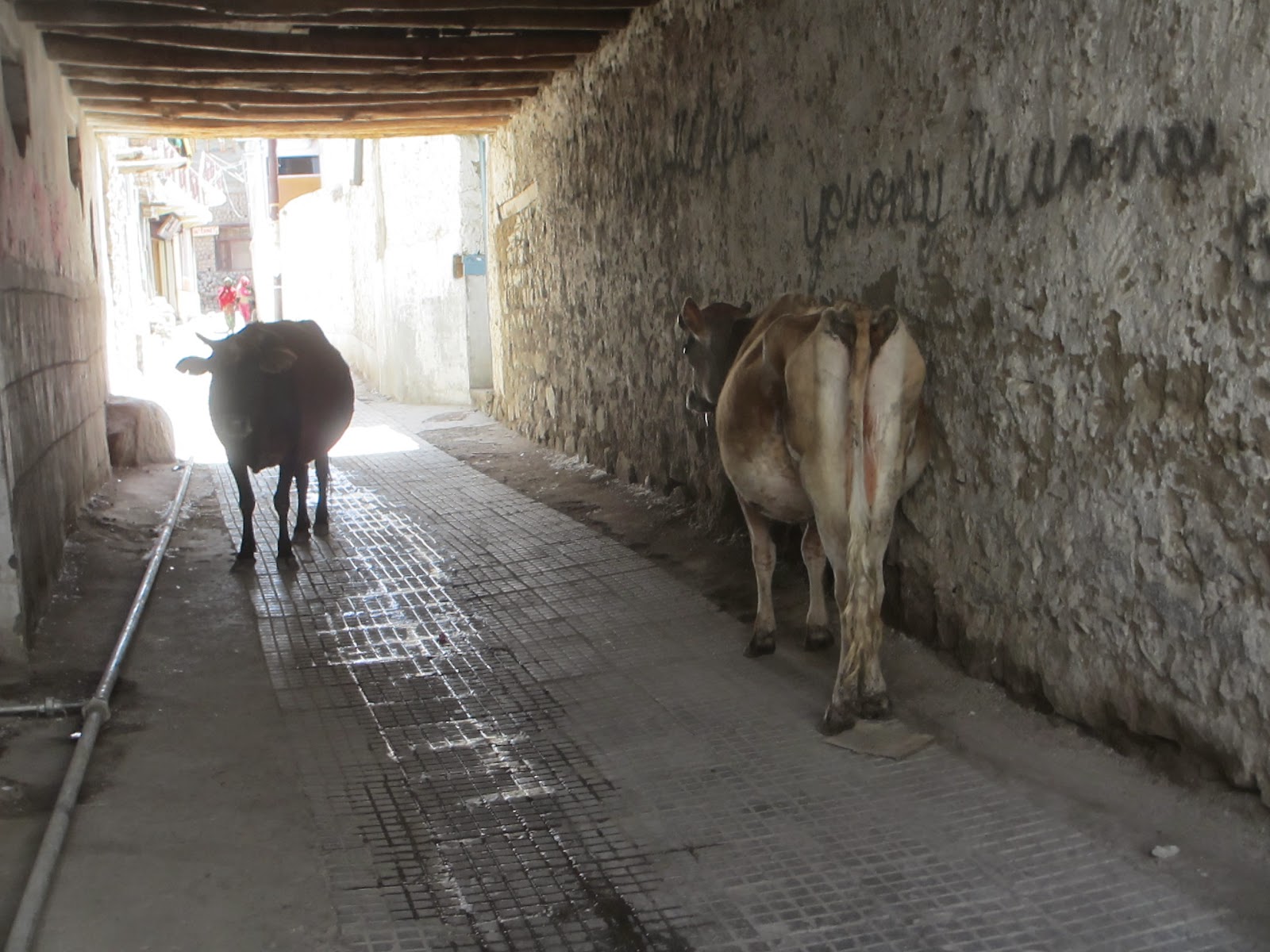 Meanwhile, although this is part of the tourist season, business is slow and some shops have closed because of the dust and construction.  Yet cows and donkeys still wander the streets at will, and Ladakhi ladies continue to sell their vegetables on the main street between the shops and the street repairs.

My friend Nazir, who owns the Gala Shop has not been too effected by these events,


but my friend Dolma, who did business in one of the buildings that was demolished, now has her sons doing business for her in one of the tent covered Tibetan Markets. Of course her close friends come to her home and she shows us lovely things there, as we drink chi tea and munch on sunflower seeds.  This year, I have bought only a garnet ring and a simple black onyx necklace.


The other day, Dolma (Jigmet’s mother) received an invitation to a Muslim wedding, and I recalled that during the preparations for Jigmet and Amo’s wedding, both Buddhist and Muslim ladies came to help. One of the daily charms of this community is the mixture of the drumming of the pujas, or Tibetan prayer sessions, and the Muslim call to prayer.  I awaken to these sounds some mornings, aware that there is this magical place in the world, where people still live happily in harmony side by side.

CONFESSION
OK, I did it again.  I fractured another bone.  Those who know me well, know I am often in an impetuous hurry.  So again, my fault.  I am almost ashamed to say that this did not happen during an exotic cross country road trip while riding on a Royal Enfield, or while trekking on a remote Ladakhi mountain trail. Much more prosaically, I slipped in the shower and fractured my elbow.  The pain was excruciating, it is the first time ever, during the fracturing of a bone, that I experienced piercing multiple tremors and a sense of nauseousness.  Well there’s some reality, I can use in one of my next novels.  Although in the future, I prefer to imagine  unpleasant happenings rather than experiencing them.

The orthopedist at the government hospital, Dr. Dorje, put my whole arm, from upper arm to around my fingers in an old fashion Paster of Paris cast.  Therefore if I decided to fly home, this kind of cast would give room for the swelling that regularly happens with new fractures.  My G- , it was so heavy, like carrying around a can of cement or the Rock of Gibraltar.   After a week, he has replaced my awkward rock with a much lighter fiber glass cast( which cost $35.00) which is easier to manage.  If the bone heals properly (so far so good), with a little physical therapy, I can carry on as if it’s just another one of those inconveniences of travel.  Otherwise, home I will go.  Brave or stupid, that’s for you to decide.  But as The Eternal Traveler, I know if everything goes well, there are new adventures ahead.