TO GORINCHEM AND ON
The bicycle riders were off as soon as breakfast was over to ride the 30 Kilometres to our next port, Gorinchem. The ship left on it’s 9:AM schedule as we headed through two bridges, one a swing bridge, the other a lift. Along the road that bordered the houses on one side and the canal on the other, we saw a man in a two seater horse drawn carriage trotting his two horses along at a steady clip. 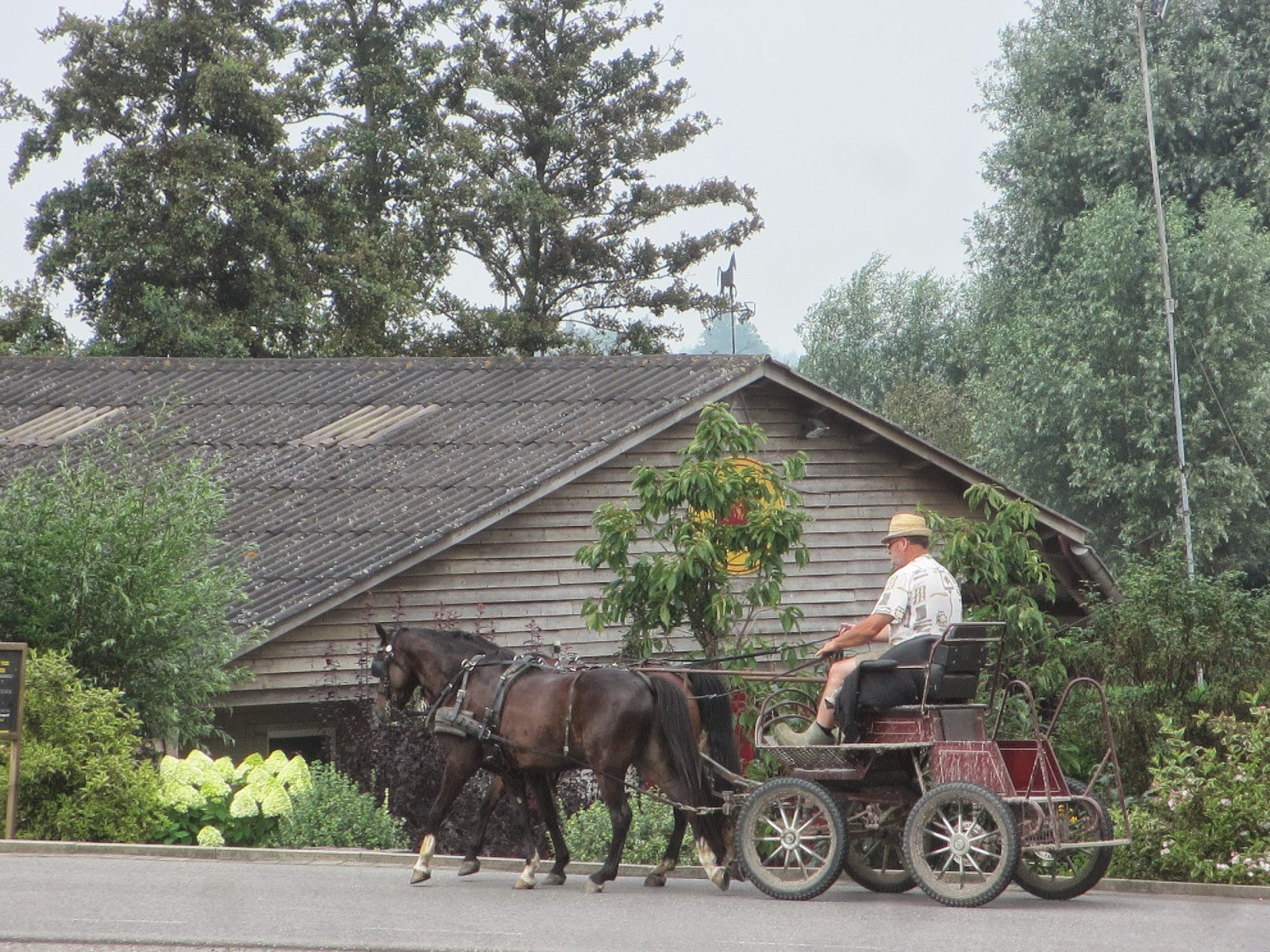 Rows of trees bordered the canal and sometimes there were tall reeds of different types.  Wide bicycle paths run along both sides of all the canals and there were numerous cyclists along our route.

Gorinchem is another charming old town, larger than Vianen with a large square full of cafes for drinks, food and ice-cream.  There is also a museum.  The current shows were: Unusual Modern Jewellery Designs (sorry I didn’t take pictures. I thought they were all extremely ugly.), the history of the city, and also an historic moment in the late 1500s, over 500 years ago. Earlier in the country’s history,Philip II of Spain, had seized the Country of Holland (now known as the Netherlands) as one of his colonies, and tried to impose Catholicism on the Dutch population.  But in 1572, the citizens of Northern Holland rebelled against King Philip and his religion.  During the rebellion, 19 Roman Catholic priests and any fervent believers among the local population who had converted to Catholicism were captured, tortured then killed by the local populace.  Today, in modern Holland one finds that there are more Catholics living in the south of Netherlands than in the north.  Probably because of the influence of this and other uprisings in Northern Holland that eventually drove Philip II of Spain, and his minions from their land. ( Some of this information was translated from a museum brochure by Corry, a fellow passenger.)

One thing I found quite interesting is that a number of the bicycles, the ladies on the boat ride, are electric.  They can be ridden at speeds of as much as 30 to 35 Kilometres and hour. Riek, a hardy 81 year old, traveling with her friend Wilma, told me, “Oh! no, I don’t go those speeds, I only go 20 to 25 kilometres an hour. I have traveled as much as 100 kilometres, I swim two days a week, play tennis two days a week, garden and clean my own house.  I am very fortunate.”

I am highly  impressed by Reik’s stamina and vigor, and hope that I too can travel at those speeds on a bike, swim and play tennis when I reach 81 years of age.  She also told me, she will be 82 on October 4th, which is Animal Day in Holland, “A good day for animals.” Riek said.

Upon tying up at the dock in Gorinchem, we found that one of the little ladies who rode an electric bike had caught the tire of her bike in a rut and had toppled over down the side of the bike path. She hurt her leg and damaged her hand and arm. The ambulance had arrived and taken her to the hospital before the boat had docked.  After dinner a couple of the other lady passengers went over to the hospital to check out her condition.  I was told she had internal bleeding in her chest and had to stay in the hospital for at least two days.  It was about three days later, that she hired a taxi and was back on the cruise.  She arrived with a great bandage on her leg and an enormous cast on up her arm which covered her whole arm from the elbow down and her hand.  And what did she brake to require such a big cast - her pinky finger.  Of course the bicycling part of the cruise was over for her, but she was out walking  about the towns enjoying the sites with the rest of us.

.
2ND FULL DAY
Today we are on our way to Zierkzee via Bruinisse.  We were suppose to leave at 7 AM, stop at Bruinisse at 11:30 for two and a half hours, then go on. Unfortunately, it is raining heavily. There is thunder in the distance,  and the rain streams down the sides of the main cabin’s glass windows. Outside big drops hurl down on the canopied covered deck keeping most of my fellow passengers(except the smokers) in the main cabin. We are unable to leave port until 9: AM.  Instead of bikers off on their rides, we have most of the 17 of us in the main dining room chatting, reading, doing puzzles, and a small group delighting us with their melodious voices singing in English, Cockles and Mussels, Michael Row Your Boat Ashore, and then singing some really lovely Dutch songs, (to which almost everyone joins in singing ).

Our120 foot boat is dwarfed by enormous barges (or tankers carrying gasoline) that pass us, some three or four times our length. Outside the land is verdant from the rain.  A weather report informs us of extreme flooding in Amsterdam a city built below sea level, and of the road closings there and throughout other parts of the country. Holland is saturated.  It sounds much like the weather we experienced at home in south Florida in surrounding communities this spring..  We cruise along in a more misty rain passing through bridges and into the Krammer Volkarat (a rather wide river) as if nothing has happened. Yet, those individuals who find road closings in and around Amsterdam know better.

Although everyone is lovely, probably because I live alone, I am finding it hard to be confined daily on a boat with so many individuals.  I crave some quiet solitude, which I could certainly enjoy in my cabin, but then I would miss seeing the scenery.  So I tough it out, and when we finally reach Ziekerzee, I am the first to disembark. I find it odd that in this group of people surrounded by water, many of my companions do not like fish. I plan to miss dinner, as I am going out on the town to eat FISH.

I also have some very definite errands, post cards to mail, finding an English language newspaper, and hopefully the Internet.  Thus, when I got off the boat, I immediately ask the first local I see, a nice young man, Foris, who happened to be working in the ice cream shop next to the pier.  He was full of all kinds of knowledge, the location of the newsstand, the tourist office for stamps across from the his shop. Best of all, the ice cream stand shared their Internet with me at no charge, in gratitude I bought a carmel ice cream sundae with nuts and went merrily on my way.

The town of Ziekerzee is just one big photo opportunity, the cameraman's dream.  It has every Dutch architectural style and cliche one could ever want, masses of interesting boats, and again, interesting people. 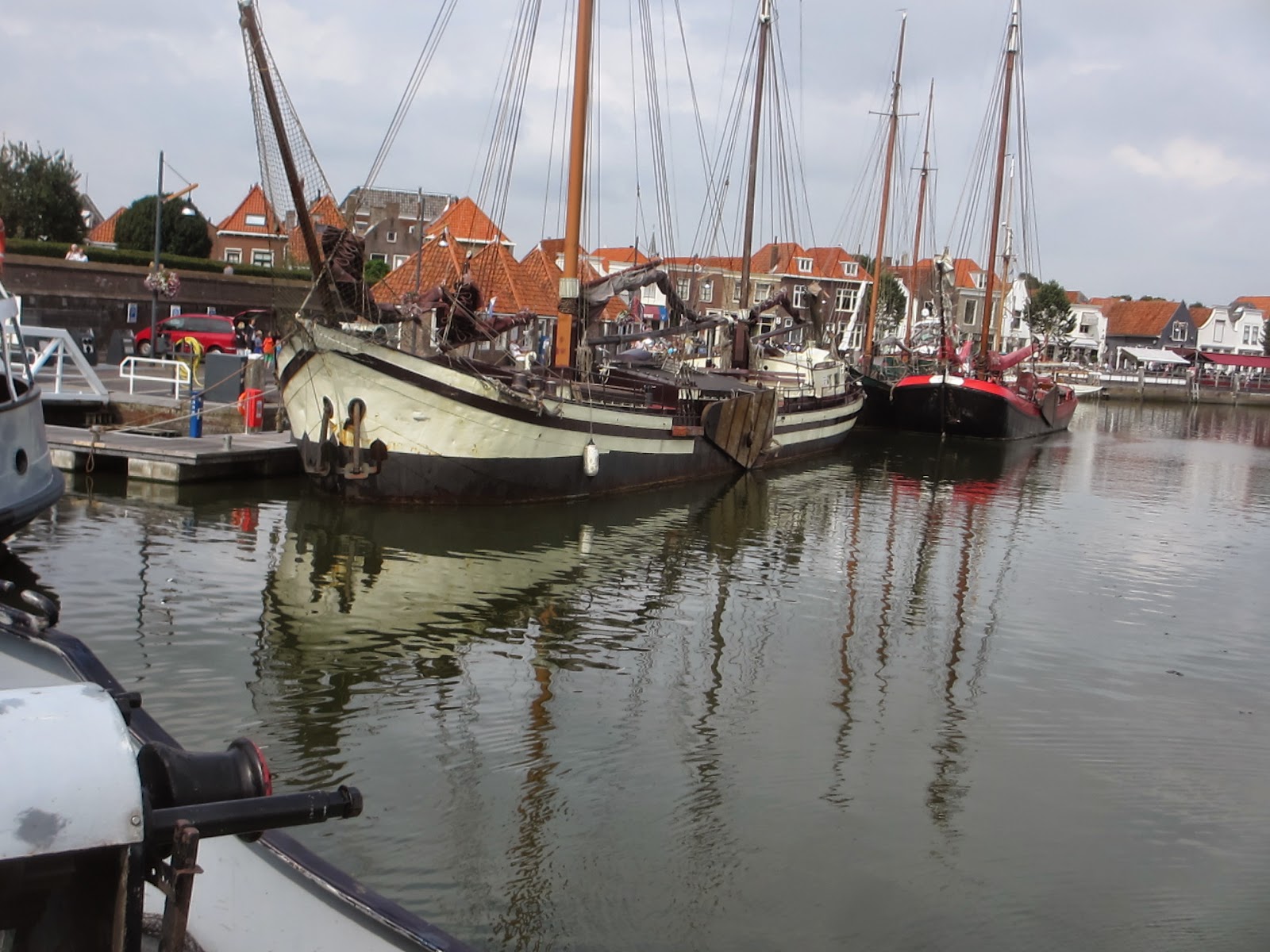 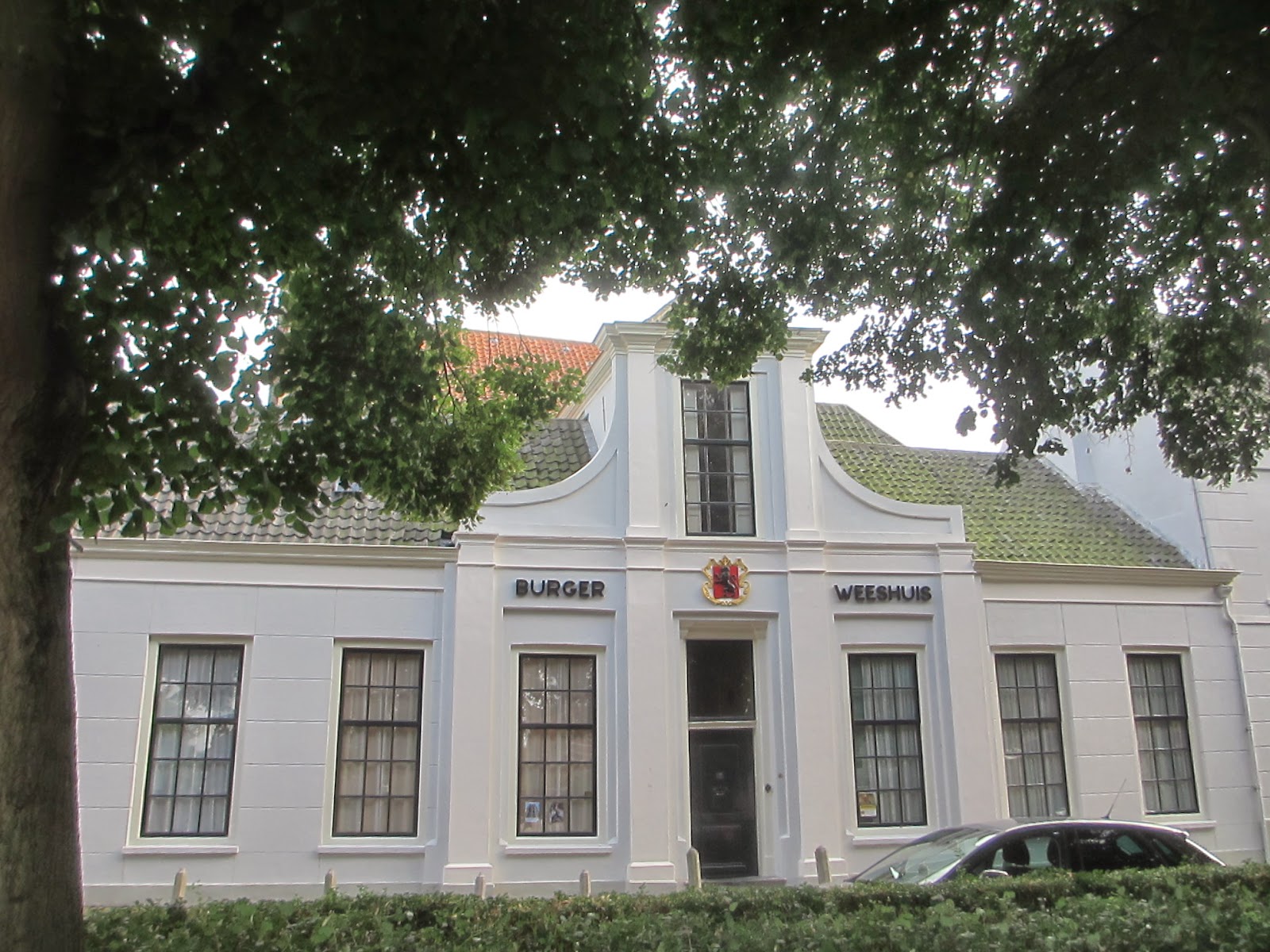 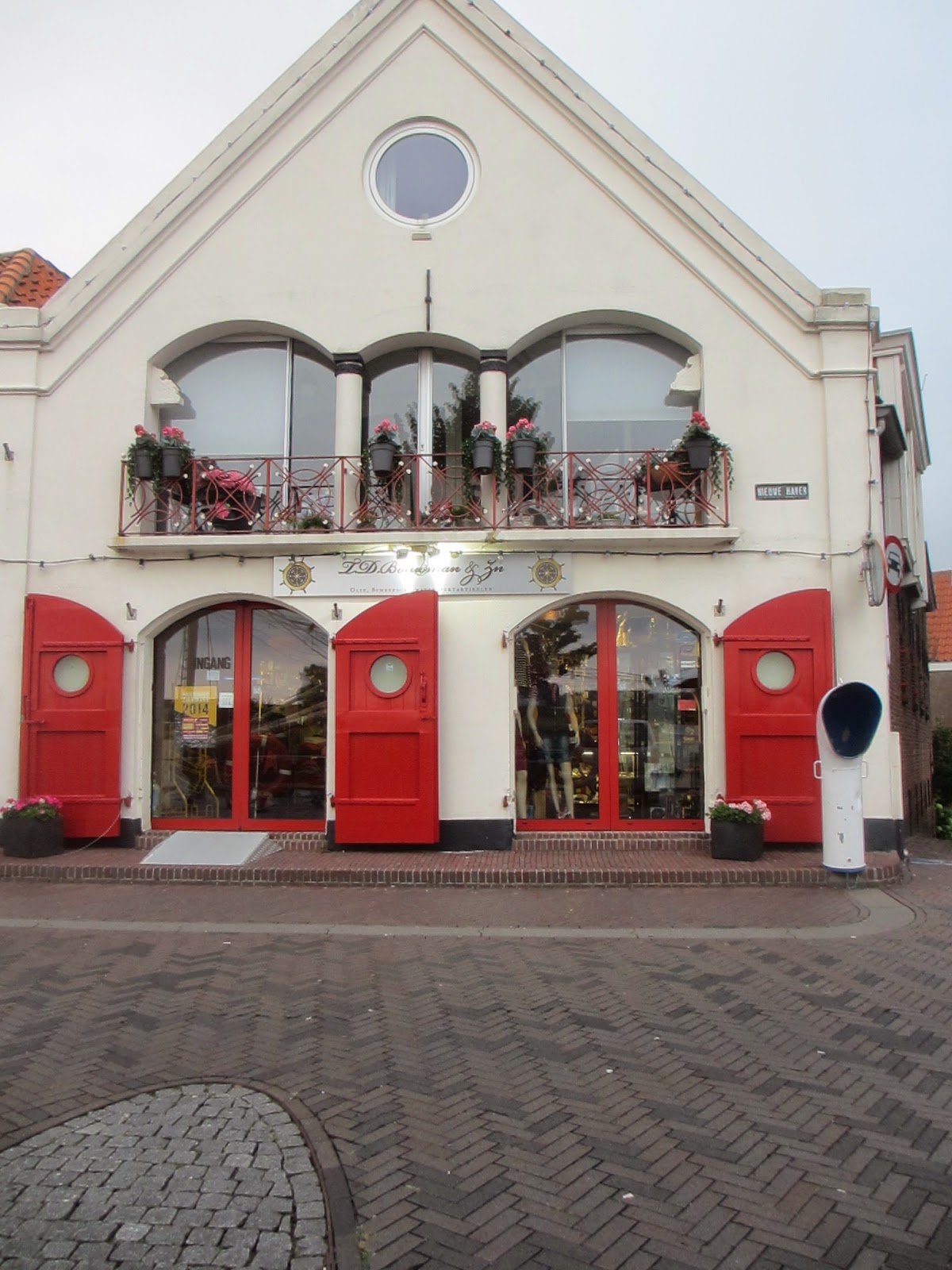 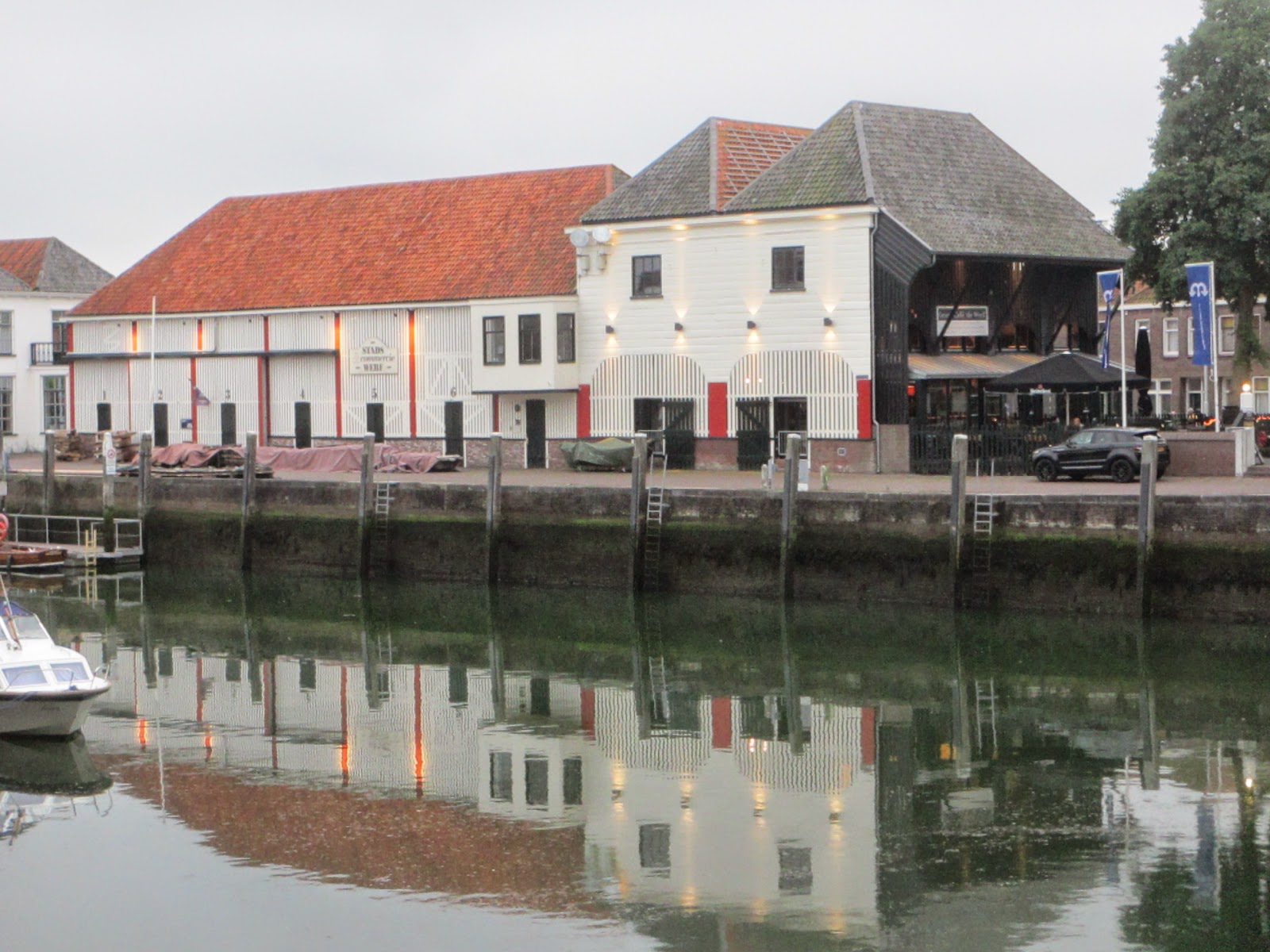 Speaking of boats, the harbor is full of all types of  boats - old and new, yachts and monstrous fishing vessels. Ziekerzee  was first settled sometime during the 17th and 18th centuries.  It’s extensive harbor is protected by great solid sea gates and a long man-made canal that runs from the river to the gates.  The canal is lined with a revetment of stones and/or grass on the lower level, with an upper border of cement, a grassy edge and then a fence between the canal sides and the bike path above.  I doubt if the bike path is more then 10 feet above the canal, if that.  Ziekerzee, on an island, is one of those  typically irresistible tourist villages   - the Swarovski sign says it all - with shops and restaurants oriented to the visiting boat/yacht and land-lover tourist trade alike. It is full of lots of ice cream and fried fish Kiosks and restaurants, as well as a couple of really good places that serve fish, baked and broiled rather than fried.  Lovely. 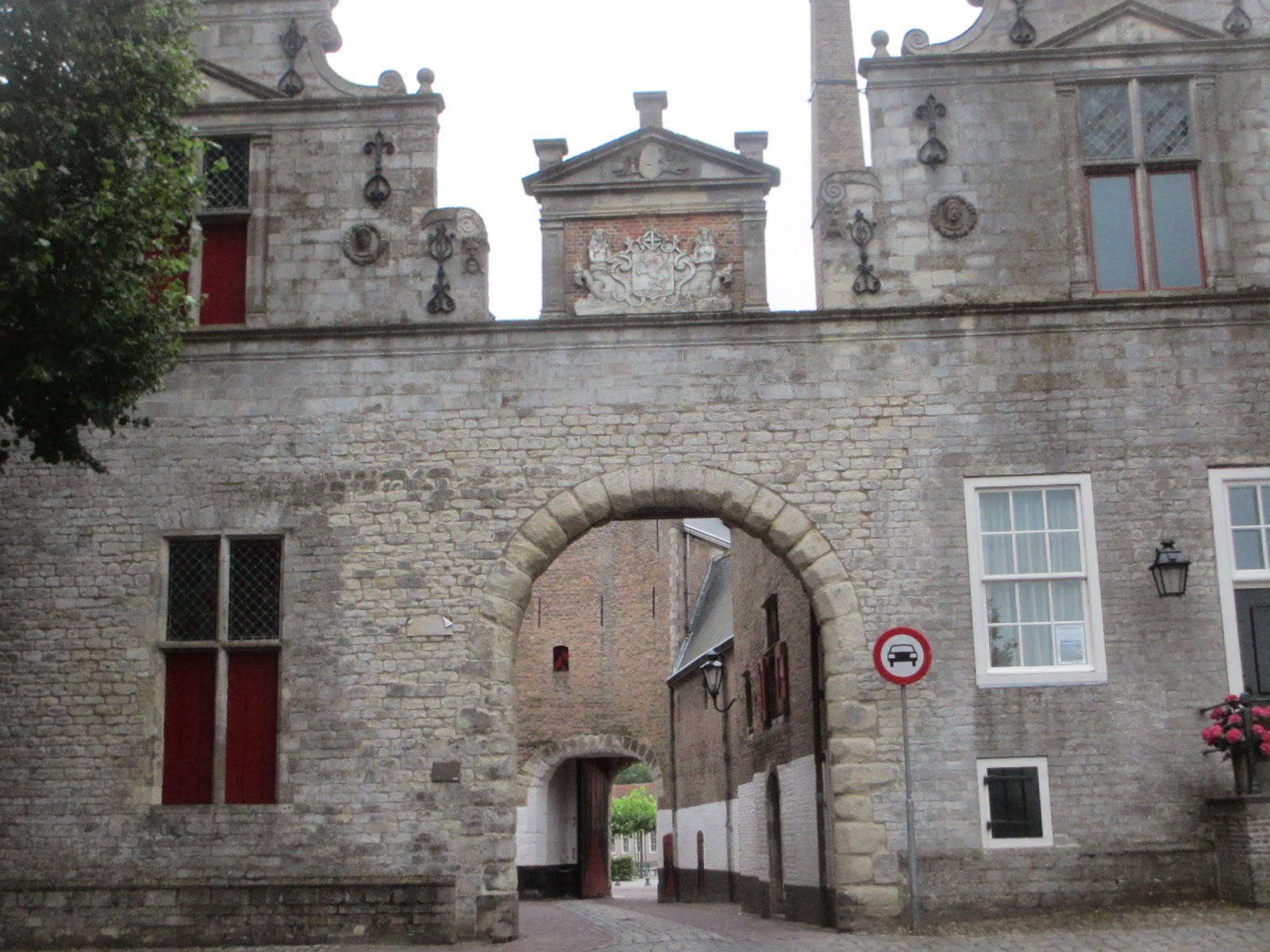 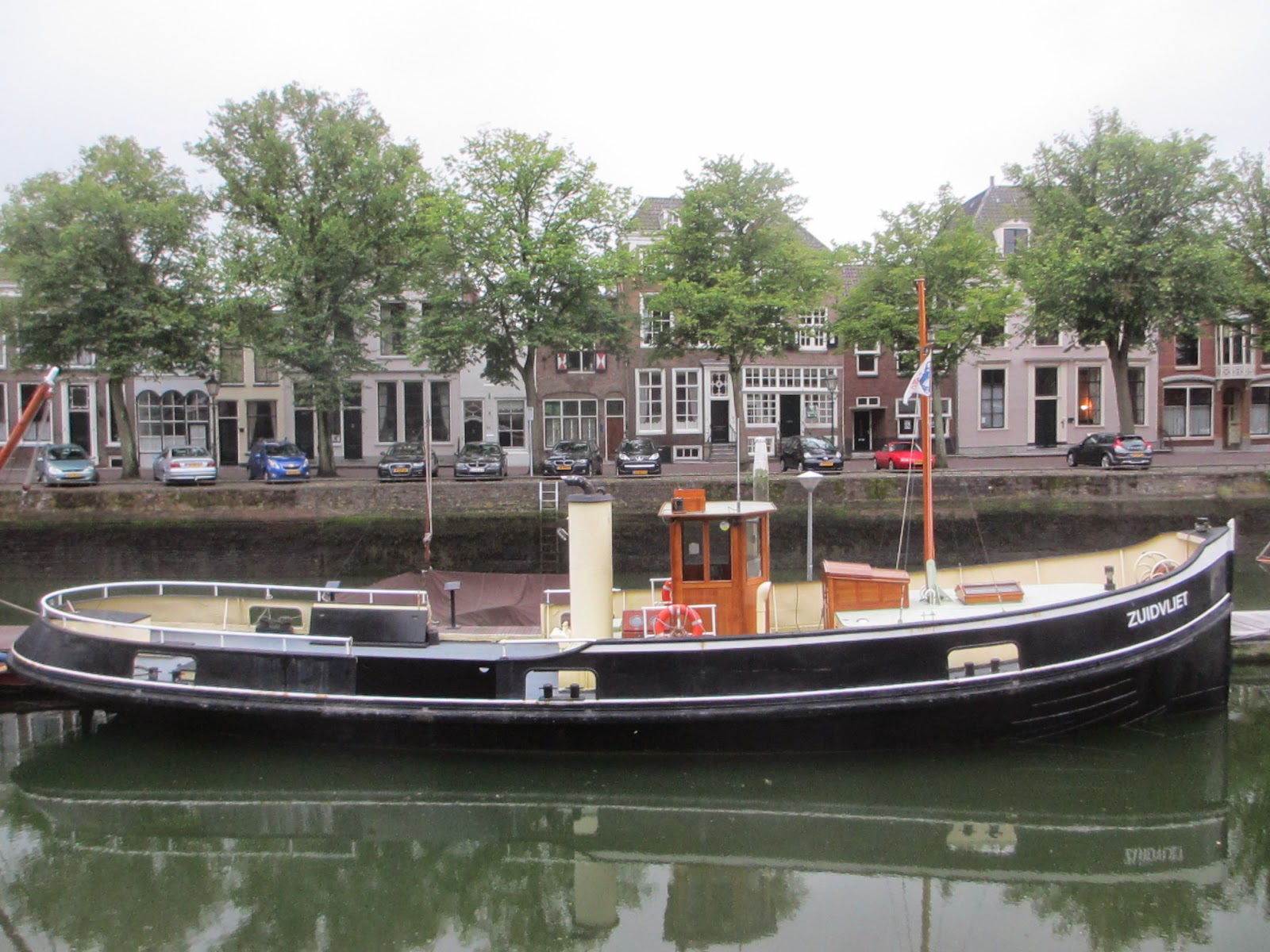 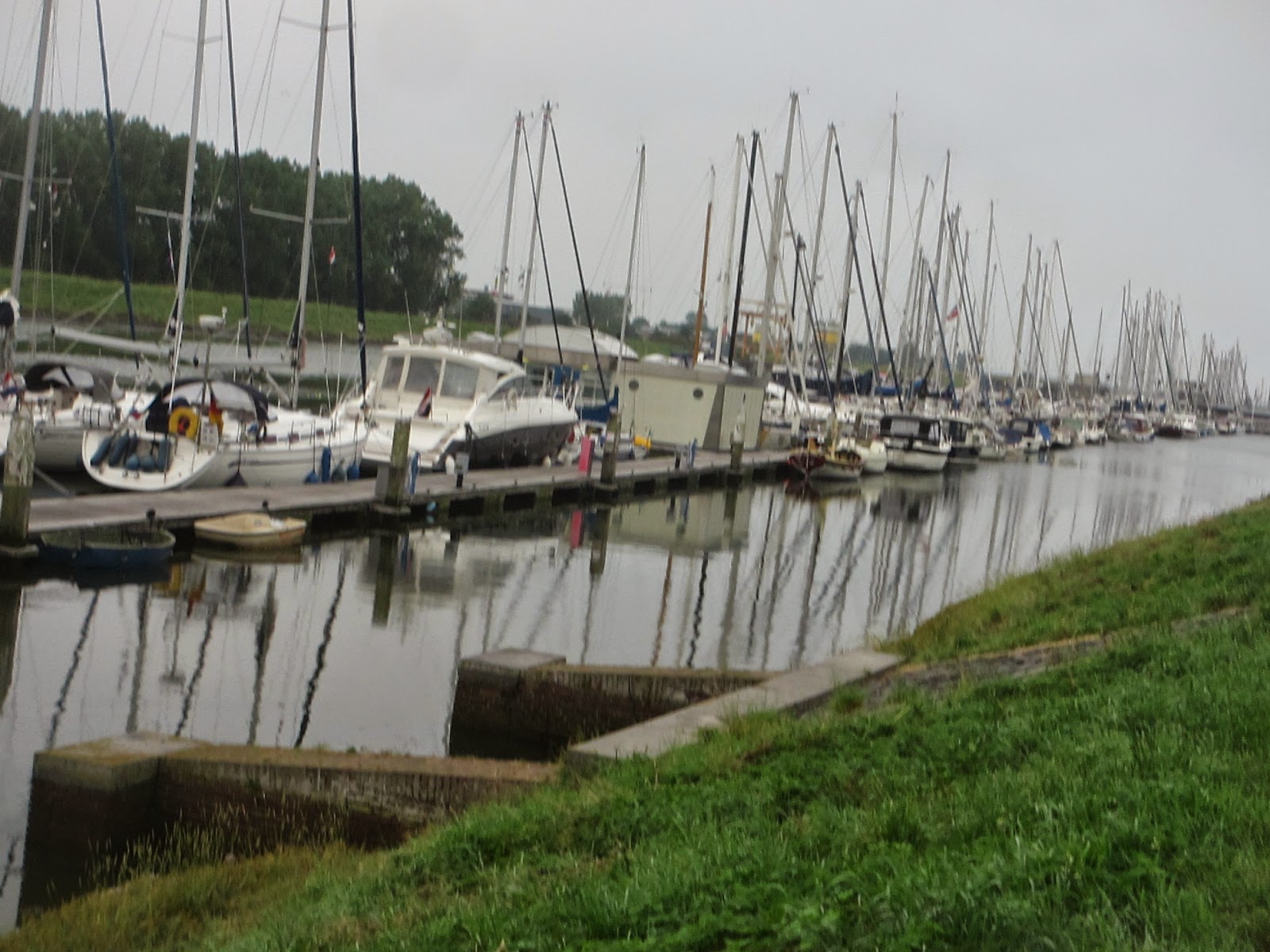 After unloading the bikers who will ride the 55 kilometres to our next port, we leave Ziekerzee, crossing Keetenon Mastgat (I understand Mastagat -translates to something like small body of water - check the map), and will be going through another small canal heading to Middlelburg.

For those readers who are not boaters below are a few nautical terms:
FOR(forward) or BOW - the front of a boat.
AFT(afterward) or STERN - the back of a boat.
MAIN CABIN - sitting and/or dinning room.
CABIN - bedroom
BUNK - bed
HEAD - toilet
GALLEY - kitchen
PORT or PORTHOLE - window
Now you have the lingo, you can go on to become real sailors. Or you can go to AMAZON.COM and buy my novel DISPOSABLE ASSETS, where you can read about the main character’s number of sailing adventures.

Posted by THE ETERNAL TRAVELER at 10:33 PM